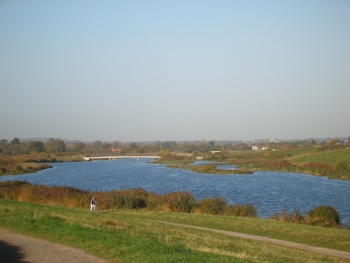 Measures in the Cherwell catchment

Future aims With additional funding even more could be achieved. The following outlines projects and outcomes that could be realised with additional partnership funding. Additional measures with £100,000 per year:

Additional measures with £1 million per year (as above plus the following):

Measures in the Colne catchment

To support ambitious abstraction reductions, Affinity Water will invest over £2,000,000 to improve river morphology and habitat, and undertake other improvements with local people and landowners. The work, together with Environment Agency investment of £190,000 in 2015/16 (raised from abstraction licence fees), will improve river function and resilience, which will secure public benefits and contribute to improved status of the Misbourne, Ver and Gade chalk rivers in Buckinghamshire and Hertfordshire.

With a £10,000 contribution from the Box Moor Trust (the riparian landowner), the partnership is supporting a £54,000 project to restore and enhance flood plain connectivity and river function of a 1km stretch of the river Bulbourne in Hertfordshire.

With additional funding even more could be achieved. The following outlines the projects and outcomes that could be realised with additional partnership funding.

Further information on the partnership is available at: http://www.colnecan.org.uk/.

Measures in the Cotswold catchment

Windrush – hosted by BBOWT and consists of a similar mix of statutory organisations, non-government organisations, councils and local interest groups such as the Evenlode. The priority river basin management issues to tackle in both catchments, affecting both surface water and groundwater, are diffuse pollution from agricultural run-off, point source pollution and poor habitat.

 Windrush - preventing rural diffuse pollution at source (for example, cattle poaching) and repairing associated bankside damage in the upper catchment will result in improvements in the status of fish, sediments and phosphate. A landscape-scale flood plain recovery project and a wetland creation project are being developed. Future aims

With additional funding even more could be achieved. The following outlines projects and outcomes that could be realised with additional partnership funding. Additional measures with £100,000 per year:

Further information on the Windrush partnership is available at: mailto:info@bbowt.org.uk and for the Evenlode: mailto:hilary@wildoxfordshire.org.uk.

 Thames21 River Keeper team will continue to provide community engagement and educational activities, which raise awareness of the importance of the Cray, its habitats and ecology. They will deliver habitat improvements within the river. Thames21 provides over £30,000 to the catchment per year.

 NWKCP and SERT are working together on a £41,000 project to improve fish passage on the upper Darent. The creation of a bypass channel around a large structure will reconnect over 1.5km of the river near Sundridge.

 Angling clubs will continue to provide habitat improvements to the river and lakes. Projects include reduction of shading, creation of low flow channels, pool and riffle features, artificial margins, and monitoring of invertebrates and water levels within the river. This voluntary work contributes over £20,000 to the catchment each year. Future aims

Measures in the Kennet catchment Catchment partnership: The Kennet catchment partnership is hosted by Action for the River Kennet and includes representatives from the local community, Atkins, the Canal and Rivers Trust, Centre for Ecology and Hydrology, the Environment Agency, the Kennet and Avon Canal Trust, the Kennet and Pang Fishery Action Plan Stakeholder Group, Kennet Valley Fishery Association, Natural England (NE), Reading and District Angling Association, Thames Water and West Berkshire District Council. The priority river basin management issues to tackle in this catchment are interrelated and are nutrients, sediments and algal growth; channel modification and degradation of habitats; and pressures from abstractions within the catchment.

Contribution to environmental outcomes for 2021  Significant habitat restoration and fish passage projects are underway and planned in the Middle Kennet and Lambourn. These will improve fish populations and improve hydromorphology by reducing the impact of impoundments. Funded by combination of the Environment Agency, NE and private funds.

 *Projects working with farmers to reduce nitrate and phosphate pollution are underway and planned in the Middle Kennet and tributaries with funding from NE and the Environment Agency bolstered by additional funding and ‘in kind’ assistance from partners.

 *Public outreach projects (for example, Yellow Fish and ‘You poo too’) to reduce pollution from sewers and roads are underway for the entire catchment.

 *Water efficiency projects ‘Care for the Kennet’ are helping households to use less water in the Upper and Middle Kennet.  *A cross catchment partnership project, funded by Defra, will improve understanding of the impact of septic tanks and develop ways to reduce pollution from them.  *Urban habitat restoration and fish easements to address low fish populations are planned for the Lower Kennet.  *Continue to work with Thames Water on abstraction issues in the Kennet, including the construction of pipeline from Axford to Swindon to be completed in 2016.

Future aims With additional funding even more could be achieved. The following outlines projects and outcomes that could be realised with additional partnership funding.

Additional measures with £100,000 per year:  *complete the Upper Kennet Habitat Restoration Plan projects  *implement a Lower Kennet Habitat Restoration plan to bring the poorest water bodies to good status by resolving failures in fish, invertebrate and plant populations and improving amenity and recreational value  *improve understanding of the relationship between water quality and algal growth and implement a plan to reduce the problems of algae and its impact on plants  *agree a strategy for resolving the issue of the interaction between the Kennet and Avon canal and the River Kennet Additional measures with £1,000,000 per year (as above plus the following):  *improve water quality in Kennet and Avon canal to reduce its impact on the river  *take actions to improve treated waste water from small point source inputs  *review water management in the upper Kennet and improve water efficiency

Contribution to environmental outcomes for 2021  *The Loddon Farm Advice Project focuses on rural diffuse pollution across the catchment. The project aims to improve the status of phosphate and fish in 3 water bodies by 2021 as well as reducing the impacts of pesticides on public drinking water abstractions. Currently 80% of the funding comes from government grant although alternative funding streams are being investigated. The cost of the measures will be in the region of £200,000 over 6 years.  *Several projects currently in place include action to reduce the impact of invasive non-native species, raising awareness of riparian habitat management with landowners and holding an annual ‘Rivers Week’ to increase engagement with the public.  *The Loddon catchment partnership is also involved in a joint project with other nearby partnerships to raise awareness of the issues of phosphorus from domestic waste water inputs and to address problems associated with septic tanks and misconnections contributing to algal blooms in the rivers.

Future aims With additional funding even more could be achieved. The following outlines projects and outcomes that could be realised with additional partnership funding.

The priority river basin management issues to tackle in this catchment are:

A project to enhance the Beverley Brook through Richmond Park has been funded by the Environment Agency’s Environment Programme, the Catchment Partnership Action Fund, Friends of Richmond Park and other sources. This project will enhance river habitat throughout the park with the creation of a backwater, bank softening, 500m of in-channel improvements and measures to control the impacts from deer and dogs. The project also aims to improve water quality by working on outfalls to reduce silt and other contaminants entering the river.

With additional funding even more could be achieved. The following outlines projects and outcomes that could be realised with additional partnership funding. Additional measures with £100,000 per year:

Link back to the main England country page: England