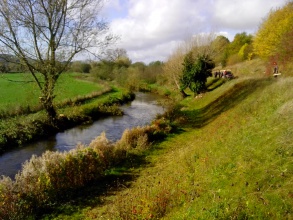 The Wylye used to be over wide and straight, particularly on this stretch. Brushwood structures installed alternating on both banks have helped recreate (in-channel) sinuostity.

The overarching goal of this project was to enhance the river habitat quality of the Wylye over a length of 2000m. Within five years from project completion, once the effects of structures and planting have maximised, the river will provide a complete configuration of high quality habitats for key-species (i.e. Atlantic salmon, ‘wild’ Brown trout and River water-crowfoot), in all their lifecycle stages, but also incorporating the needs of a whole raft of supporting species. In addition, the river will provide a better, more challenging ‘wild’ fishing experience, the Wylye valley will be perceived as a more natural, aesthetic river landscape by river-owners and users and the whole system will be more resilient to short term incidents (droughts, floods) and long term changes (rising temperatures due to climate change).

A very important driver of this project was to bring together different stakeholders and interest groups on the river to make this project into a synergistically resounding success. Funding for the project come from the riparian owners, the Environment Agency and the Wylye Fly Fishing Club (WFFC). There was a contribution in time, free of charge, from WFFC and the Wessex Chalk Streams Partnership (hosted by Wiltshire Wildlife Trust, supported by the Environment Agency, Natural England, Wessex Water and the Wiltshire Fisheries Association). These two core partners have also provided and supported volunteer labour during the delivery process. Additional funding for specific parts of the work came from the Woodland Trust. The involvement and engagement of such a diverse group of organisations, people and professions ensured that we did not focus on just one specific outcome, but took all points of view into account. Furthermore, volunteers physically working on river enhancement projects took pride in their work (see the image gallery) and developed a feeling of ‘ownership’.

At the end of the project we had installed more than 60 ‘soft-engineering’ structures, ranging from simple log deflectors to large brushwood mattresses. Furthermore, we re-build riffles (by introducing fresh gravels) and we re-aligned the channel at two occasions. Also, involved Well-Being group with delivery.

Whilst empirical evidence relating to the success of the project is not yet available – the project was only finished by the end of 2014, certain indications were noticed within weeks of project completion and these suggest that we have achieved many of the goals set for the project.

For example, in more than 10 areas where structures have been installed to increase bed dynamics and re-energize erosion-deposition equilibriums, the evidence of scour, cleaning and sorting of gravels by the river is already clearly visible.

We cannot yet prove that this has led to an increase in fish spawning, but we can show that the gravels are now suitable for that purpose, whereas before they were concreted. Similarly, the dozen of brushwood structures installed to trap sediments and narrow the channel are clearly doing so. There is a higher flow velocity around the structures and the accretion of silt within them, is clearly visible. This has created in-channel sinuosity with the structures (woody debris and brushwood mattresses) deflecting flow from bank to bank from what was a uniform flow.

Further indication that the river restoration has already had a positive impact has been provided by chance meetings with fishermen on the river bank. Feedback has taught us that the fishing has become much more varied in the months after the work was delivered: a greater number of productive fish lies and much more variation in habitat and higher numbers of Grayling caught.

A more thorough evaluation of the project can (and will) be undertaken in the next year(s), when results from several monitoring efforts will become available. Prior to the project a topographical survey of the river bed and banks was undertaken. This survey will provide a baseline comparison when we repeat this survey in two and five years’ time. That will tell us whether we have indeed increased variation in channel morphology.

The long running Environment Agency programme for Atlantic salmon redd counting on the river will be continued. This will enable a pre- and post-project comparison of redd location and abundance telling us whether we have improved spawning conditions.

Repeated Fixed Point Photography (FPP) is being used to assess the establishment and development of river enhancement structures – such as hinged willows. Photos are taken at least twice a year. Although in itself very valuable, FPP cannot be used to evaluate the actual success in terms of reaching SAC, WFD targets. Data from biological monitoring are essential for that. Ultimately WFD and SSSI monitoring carried out on larger spatial and time scales will answer whether this project has contributed to the water body meeting these objectives.

We did not encounter any major issues. Yes there were small hiccups during the delivery side of things (wrong gravel delivered, last-minute change of contractor), but not something that truly endangered the project.

The approach we took - project delivery mainly by volunteers - was so successful that we will endeavour to make that an important part from all future projects.

Looking upstream before the work…

Re-opening of a back-channel provides shelter for juvenile fish.

During the process: narrowing at one side of the channel has already been undertaken (by installing a brushwood mattress), now waiting for the digger driver to finish the job by…

Bed raising by introducing new gravels (from a local quarry).

Volunteers and tools ready for a day’s work on the river.

Volunteers building a natural revetment out of hazel screens to narrow the river and in the process remove rubbish (radiators) used as river bank protection.