From RESTORE
Jump to: navigation, search
4.33 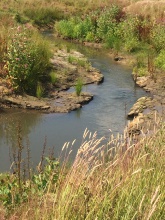 The Sussex River Ouse near Slaugham, West Sussex has historically been managed for navigation. These works have straightened the channel, increasing the width and depth in many places. The Spring meadow site is on the north eastern bank of the river at Sheffield Park, within the High Weald Area of Outstanding Natural Beauty (AONB). The site was acquired by the current landowner to increase wildlife value in the area. Since conception in 2010, works on site were finished in 16 weeks and the project was completed in 2012. Initially it had been hoped to complete works in 8 weeks, however heavy rainfall caused a relatively short delay.

The Sheffield Park Meanders project involved the reinstatement of the historic meandering course of the Ouse at spring meadow to achieve the following aims:

• Reinstate the historic course of the river through the re-excavation of the visible meander. The creation of a meandering channel allows a greater diversity of habitats to develop, specifically for multiple fish species.

• Reduce flood risk by creating a longer meandering channel length, which slows the flow of water heading downstream. At the same time the new bank profiling aimed to encourage natural functioning of the floodplain.

• The incorporation of a low flow channel which maintains sufficient water depth for fish migration in all flow conditions.

• Restoration of existing wet meadow habitats at the site and creation of new woodland areas.

Initially a 20 meter trial area was excavated, allowing adjustments to be made on expert on site recommendation. Banks were roughened up with a toothed bucket to ensure an undulating bank profile. Spoil from excavation was spread across a railway embankment close by to reduce the cost of disposal.

The project is one of thirteen projects within the Middle Ouse Restoration of Physical Habitats (MORPH) project; led by the Environment Agency in partnership with the Ouse & Adur Rivers Trust (OART) & supported by Royal HaskoningDHV (design, engineering and environmental consultancy services) and C A Blackwell (contractor for the implementation works). Each of these projects is being considered individually but also in terms of how they will work in conjunction with each other to improve the diversity of the river and reduce flood risk.

Several details were built into the design to meet the site specific requirements. A ford was constructed to give access to a newly created island area in the centre of the channel. Woody material was added to the new channel at five locations to encourage flow diversity and provide the channel with some shade. The existing channel and new meandering course are joined via a bund constructed at the upstream confluence of the two channels. At normal flow levels this directs all the flow down the mender, leaving the old course as a backwater. In times of flood the bund can be overtopped, allowing water to flow down both channels, increasing local flood capacity.

The land surrounding the site is in Higher Level Stewardship scheme for floodplain hay meadow. The island at the centre of the site was no longer manageable as a hay meadow, therefore a Forestry Commission Woodland Creation Grant was approved to create 1.5Ha of floodplain woodland. This area would slow the flow of flood waters, help to trap sediment and increase biodiversity of the site. Promotion of the project included coverage on BBC South East today programme, local papers and area group websites.

Working with University of Brighton, the project has set up a long term monitoring programme to look at and assess geomorphological changes, seed dispersal of Himalayan Balsam, and hay meadow restoration techniques.

The design of the new two-stage channel (incorporating a low flow channel) has increased water depth during low flows. In combination with a greater variety of channel widths and depths, this has increased habitat diversity which should benefit fish populations.

Within a year of the project works, native vegetation had begun to establish on the banks. This will provide shelter and feeding areas for fish during high flows and will increase habitat for invertebrate species such as dragonflies, beetles and fly species.

The newly created backwater will provide refuge for juveile fish, create warmer conditions and shallow refugia as nursey areas for young amphibians and invertebrates which live in still water. The introduction of woody material provides shelter during low flows and marginal shelves will become vegetated and provide areas for feeding and resting.

Out of channel habitat enhancement of floodplain woodland and additional lateral connectivity is expected to lead to improvements in the biodiversity value of the landscape (wet meadow habitats are nationally rare) & reduce flood risk downstream by increasing capacity for floodwaters.

The public have been consulted and kept informed of progress throughout the project, building local support for river restoration and its associated benefits.

Upstream part of the project where Himalayan Balsam will need to be managed - © Nick Elbourne (RRC), October 2013