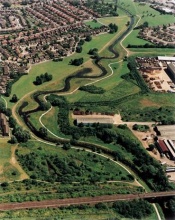 Background: The River Skerne is a tributary of the River Tees in North East England. The restored reach lies in a sub-urban area on the outskirts of Darlington, County Durham. During the last 150 years, the River Skerne has been heavily modified as a result of industrialisation and urbanisation. Between 1850 and 1945 the river was straightened and channelized, and the river corridor was markedly narrowed. Widening and deepening was undertaken in the 1950s and the 1970s, and new housing developments were built along the entire north side of the river. The area has a rich industrial heritage including the first railway company Stockton and Darlington. The Skerne (railway) Bridge, which can be found just downstream of the site, was pictured on the old five pound notes.

Restoration: The River Skerne was included in a joint initiative between England and Denmark to demonstrate best practice in urban and rural river rehabilitation and encourage river restoration in Europe. The wider aim was to promote further river restoration and demonstrate how river restoration could provide multiple benefits such as enhancement in wildlife, landscape, recreation, water quality, fisheries, amenities and other local interests.

The River Skerne Restoration Project was supported by European Commission LIFE funding with matched financial and in-kind support from the Environment Agency, Darlington Borough Council, Northumbrian Water English Nature and the Countryside Commission. The project also attracted additional Heritage Lottery Fund support to complete the original 'full scheme' aspirations. The project was managed by the River Restoration Project (the precursor to the River Restoration Centre) with significant additional partner management input from Northumbrian Water and The Environment Agency in leading the project and working group.

The restoration of 2 km of the Skerne was initiated in July 1995. Much of the floodplain had been raised by old industrial waste tipping, with gas and sewer pipes running alongside the river. As a result of these constraints, restoration opportunities were severely limited - typical of urban rivers elsewhere. At the upstream end, instream deflectors and a coarse sediment riffle were installed to enhance flow variability and habitat diversity. Further downstream four new meanders were cut across the old channel, which was used to create two backwaters. Soft revetments – such as willow mattress, willow spiling, underwater rock layer, fibre rolls, and geotextiles – were used on the outer meander bends to prevent erosion towards the gas main. As a flood water retention measure, about 25,000 m3 of spoil was removed from the river banks. This also aimed to increase the lateral connectivity between the river and the adjacent floodplain. The spoil was later used for landscaping purposes.

Hundreds of nearby properties were checked for misconnections by Northumbrian Water and thirteen ugly surface water outfalls were replaced with underground inspection /collection chambers that firstly intercept pollution and then discharge the water into the river below water level. New footpaths were constructed and a planting scheme engaging local residents carried out. At the downstream end of the restored section a new footbridge was constructed, designed to resemble a locomotive as a tribute to the historical significance of the Skerne Bridge.

Pre-monitoring Before restoration started, several indicators were monitored to see what the reference situation was for post-restoration monitoring.

One year after restoration, macrophyte species richness increased above pre-restoration levels with 30%. The downstream control site did not seem to be affected by the restoration measures. No initial changes were found in the macro-invertebrate community, but long term surveys have shown an increase in niche specific macro-invertebrate families sensitive to siltation and/or organic pollution. The fish species richness increased with Roach (Rutilus rutilus) and Chub (Leuciscus cephalus), but the total number of caught individuals was small with only 16 fish of 4 species. The appearance of new fish species can be related to the new fish pass below Darlington. Unfortunately, several severe pollution incidents may have largely eliminated recolonizing fish populations.

The river length was increased with 13%. Longitudinal and cross-section variability in meandered section was limited due to flood risk management requirements. However, macrophyte growth has provided some flow and habitat diversity. The constructed riffle at the upstream end has provided habitat for macro-invertebrates sensitive to fine sediments which were not found in the section prior to restoration (e.g. the freshwater limpet Ancylidae, the riffle beetle Elmidae, the net-spinning caddis fly Hydropsychidae and the blackfly larvae Simuliidae).

The new channel profile with lower banks increased the out of bank flow to a maximum of 4.5 days per year. The lowering of the floodplain itself created more water storage and the flood protection level has remained unchanged.

Overall, the Skerne project was a big social success. People were engaged in the project and very positive about the outcomes. The ecological status has improved, but it is still limited by the urban environment, (e.g. fixation of the river to protect infrastructure, and pollution from industry upstream).