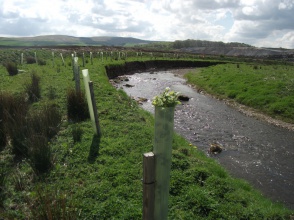 Kier has been mining at the Greenburn Surface Mine Complex since 2003, employing 50% of staff from within a 10-mile radius, in an area of high unemployment. An opportunity was realised where the River Nith, which runs through the site, could be enhanced with ecologically healthier reaches. The existing river reach was degraded because of historical agricultural pressures associated with vegetation clearance, excessive cattle poaching and bank reinforcement. Through realigning 500m of the river, the recovery of high quality coal resources in the area continued, which in turn enabled the considerable funding required to realise this project.

Kier spent six years researching and studying the River Nith with technical and scientific specialists, building on knowledge developed in this catchment. The scientific approach and stakeholder engagement was instrumental in the successful delivery of this project. The realignment morphologies are based on a new conceptual approach to design and best practice river engineering methods to create hydraulic conditions which drive the full suite of fluvial processes that would naturally occur in the river. The design considered the range of physical requirements in the channel form necessary to ensure sufficient diversity within which the full suite of hydraulic and geomorphic processes. This produced the most natural channel form as a product of interactions between hydraulic processes and the physical form of the river corridor (i.e. the natural channel type for the given reach conditions). The key geomorphic characteristics of the existing river local to the reaches were replicated – slope gradient, bank full width and depth, and sinuosity. These variables were measured upstream and downstream with the captured data used to inform and guide the channel design. Replicating the 500m length of the original length and creating a natural slope, maintained the same energy gradient for flow conveyance and sediment transport, which in turn will maintain natural fluvial processes. The natural levels of variability, together with sinuosity, aided the development of natural bed forms - allowing pools and riffles to form naturally through self-sorting rather than by creating artificial features.

The diversion improved the ecological status of the river with planting of willow along the diverted channel that naturally stabilise the river banks and once mature will create fish habitat by forming draped foliage at the water’s edge and dropping leaf litter into the water, enhancing the habitat for Atlantic salmon (Salmo salar) and lamprey species (lampetra spp.). In addition, tree planting consisting of hazel, birch, rowan, aspen and hawthorn was undertaken on the diversion to provide additional natural stability to the banks and riparian corridor habitat that did not previously exist. Within the river diversion scrapes were formed to promote the retention of water in discrete pools on the flood plain providing habitat for amphibians, birds and invertebrates. In addition, areas of dead wood and rocks were placed on the flood plain to provide amphibian refugia. These are additional features to what was there previously and are beneficial to the ecological status of the river and surrounding habitat.

To deliver the engineering works, our approach was to develop the new channel a year early in June 2011, with water flow introduced in August 2012. This enabled the channel to weather and bankside vegetation to establish reducing the necessity for engineering materials. Fundamentally, the realignment is set within a 50-metre wide river corridor to accommodate natural channel course adjustments. The substrate from old river channel was recovered while still wet ensuring rapid re-colonisation of invertebrates and plants in the new channel. Upon completion of the new reach, electrofishing was used to relocate fish successfully.

A 20-year monitoring programme has been implemented in 2014 to review the long-term biological and geomorphological components of the river ecosystem, including invertebrates, fish, riparian vegetation, physical habitat and channel morphology, and flow gauging. The achievements in restoring the habitat and improving water quality were highlighted by monitoring reports carried out by Centre for River Eco System Science (CRESS) at Stirling University, Nith District Salmon Fishery Board (NDSFB) and Environ UK.

CRESS conducted surveys of benthic macro invertebrates from upstream, downstream and within realigned sections during October 2012 and October 2014 which highlighted:

• The community structure was analysed using Shannon’s index of diversity, statistically showing negligible differences between the realigned habitats and the good quality controls upstream and downstream.

• The median Ecological Quality Indices of all samples was 0.95 - a score at the top end of ‘good ecological status’

The results of the first survey highlighted:

• The channel has performed in a completely predictable manner and fish had utilised this section of river channel as a spawning site.

• Two trout parr found in the realigned section in 2012, with 12 found in 2014 - a promising increase of 10 due to the general low abundance throughout the entire Nith system

• Parr aged salmonids have taken up residency within the diversion channel

The realignment work has demonstrated the effectiveness of the soft engineering principles that were adopted in preference to hard artificial river banks. New section of the river is indistinguishable from the adjacent reaches. The use of willows has proved successful.