From RESTORE
Jump to: navigation, search
3.00 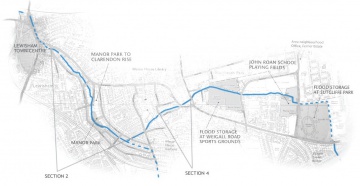 In 1968 extensive flooding affected over 400 residential and commercial properties, and flooded Sutcliffe Park. Serious flooding occurred in June 1992 when about 100 residential and commercial properties were flooded. The solution originally proposed to address this flooding called for large scale channel works to accommodate the predicted flood flows. These works would have required considerable widening and deepening of the river and the construction of significant lengths of retaining wall, leading to the loss of a large number of trees, and other natural features of the river.

The flood alleviation scheme for the Quaggy was the key driver to restoring this river.

Sutcliffe Park & Weigall Road Flood Storage Areas: When in use as a flood retention area, the park will hold up to 85,000m3 of flood water. The flood storage area located downstream at Weigall Road, provides a flood storage volume of 65,000m3 in an area currently used as a sports field, allowing for dual use of an open space. The overall Quaggy FAS includes two upstream flood storage areas in urban open spaces at Sutcliffe Park and Weigall Road Sports Ground, which significantly reduced environmental impacts by minimising the need for works (wall raising) downstream. The flood storage reservoirs hold the peak flows, thereby reducing the flow downstream and the levels required for flood protection. Through this scheme the London Borough of Greenwich has allowed the Environment Agency to ‘make space for water’ in Greenwich to reduce the risk of flooding to the residents of Lewisham. See Figure 2 for locations.

Sutcliffe park operates as part of the flood alleviation scheme providing flood storage when required. The original concrete box culvert is still utilised as part of the flood defence and, with additional control structures within it and attached to it, the culvert directs floodwater into and out of the park, see Figure 4. Downstream of the low flow inlet a small weir within the culvert directs the low flow continuously through the park. Downstream of the high flow inlet a flume constructed within the culvert constricts high flows and forces water into the lake. During flooding, the park is designed to fill up from the centre to prevent the creation of islands within it. If the storage area were to reach capacity a spillway directs the overflow back into the culvert.

The low level footpaths are above the 1 in 1 year event flood level, hence minimising regular disturbance to users.

The Quaggy River between the Weigall Road flood storage area and the confluence with the Ravensbourne is dominated by narrow concrete and brick-lined channels running primarily between rear gardens, with occasional small sections of naturalised banks along rear gardens and open spaces, see Figure 6. It is a typical urban river with a very restricted floodplain, numerous properties and riparian owners and a wide uniform river bed.

The overall design aim for Sections 2 and 4 was to achieve a 1 in 70 year level of flood protection by incorporating flood defences set back from the river in all possible areas including in rear gardens, enhancing retained hard structures through the careful incorporation of environmental features, retaining as many trees in the river corridor as possible through sensitive design and improving the geomorphology of the channel upon completion of the works.

A reduced scope of works at these downstream locations was possible due to the implemented flood storage areas upstream. The reduced flows downstream also give the scheme the characterisics of an integrated urban drainage solution through Lewisham as there is capacity in the river for storm water overflows.

Two stretches of natural riverbank along this section of works were lower than the necessary level for a 1:70 flood protection, thereby affecting properties, mostly terraced homes, to a high risk of flooding. Historically, this problem was addressed on the Quaggy by providing concrete or brick river walls at the bottom of gardens to contain flood waters. This solution was deemed unacceptable on this project for environmental, social and flood defence reasons. Instead an innovative solution was proposed whereby flood defences were to be incorporated into garden structures through careful design. This provided exciting garden designs for residents and improved levels of flood protection for these properties, flood storage areas within gardens and preservation and enhancement opportunities along natural riverbanks. HDA Landscape Architects have been responsible for the revised garden designs.

In one location consisting of ten properties, these set back defences were incorporated into existing decks and included features such as steps or planting beds, giving them the appearance of new and interesting garden features, see Figure 7. In the other location of set back defences, consisting of twelve properties, many of which have been sub-divided into flats with very deep and often subdivided gardens, the set back defence took the form of a low wall within the garden. In some properties, this wall acts to provide divisions between gardens of differing ownership, and in others it divides formal garden areas from wilderness areas associated with the river. In all instances, the walls incorporate planting beds, steps and other features as requested by residents. The riverbank in these two sections of properties will be secured by coir rolls pre-planted with locally sourced flowering plants and grasses to enhance the residents’ enjoyment of their river access and hopefully increase awareness of the river in general. In both of these areas, residents were asked to contribute as much as they were willing to the design of walls, garden features and planting plans to ensure long term designs which met multiple objectives of flood defence, community involvement and environmental benefits.

Other factors which increased the risk of flooding along this section of river were crumbling river walls falling into the river and creating blockages, pipes and low footbridges crossing the channel above mean water levels causing blockages during flood events, and steep earth banks subject to scour, thus undermining existing trees and causing blockages. To address these concerns, existing poor quality walls have been repaired or replaced with landowner input into reinstatement; pipes have been buried; a footbridge lifted and related ramps and steps constructed. Banks were stabilised with coir rolls to reduce the risk of scour and to enhance the channel by restricting the width in localised sections.

Prior to construction, eleven baseline surveys were carried out including surveys of riverine flora, trees, bats, fish, birds and mammals to inform designs in progress and enable the process of environmental impact assessment. As a result of these surveys, working methods on site have sought to identify key environmental features and to retain them where possible. This has meant educating the contractor’s staff through toolbox talks and site supervision, leading to site staff who recognise some of the locally rare plants and adopt sensitive methods when working near them.

83% of visitors feel differently in the park now the River Quaggy runs though it, because of increased biodiversity, better opportunities for recreation, and the peacefulness and relaxation of being near water.

Sutcliffe Park - How it works