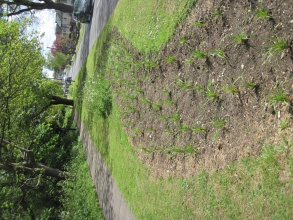 The Houndsden Gutter is a tributary of the Salmons Brook, a small river running through Enfield which joins the Lea Navigation. Like many urban streams it suffers from pollution. Oils and heavy metals wash off the roads when it rains, flowing into surface water drains which lead straight into our streams and rivers. The plumbing in some homes and businesses is misconnected, sending water from appliances, sinks and sometimes even toilets into watercourses instead of the sewers.

In 2015 we worked with the London Borough of Enfield to create two rain garden systems to improve the water quality in the stream. They have been designed to treat water that runs off Houndsden Road every time it rains, taking run-off from a busy section of Houndsden Road, which previously flowed directly into the Houndsden Gutter. Water is directed along the verge where it infiltrates into the soil or, in high flow conditions, into the large, natural woodland treatment basin.

In the first system a two metre wide swale was created along the verge using a low impact digger. A footbridge was created to allow the swale to continue into the natural basin of the spinney. Kerbs were dropped at two points along the verge to allow water to enter the swales from the road. Finally, the road gully just up from the top of the system was filled so water would be redirected into the swales. Further down same road a second rain garden system was implemented in September 2015, made possible with match funding from LBE. These roadside rain gardens have allowed for another road gully to be filled and more road run-off off to be filtered before entering Houndsden Stream. This scheme consists of a swale and two rain gardens taking water from Houndsden Road. In low rainfall conditions water is temporarily stored in the rain garden basins and slowly infiltrates into the verge. In high rainfall conditions, and when the basins reach a critical limit, water is transferred through a pipe, under the footpath and into the natural woodland basin in the spinney.

The water treatment occurs in two ways. In the natural woodland basin of the Spinney, chemicals which would pollute the river are naturally and safely used by plants to grow or broken down by bacteria in the soil. The swales have been planted with sedges and native grasses to slow water flow and begin the treatment, and the woodland basin planted with suitable native seed mixes. Water will then naturally soak into the soil, recharging the water table. This is particularly important during times of summer drought. These rain gardens prevent oils and heavy metals washing into the Houndsden Gutter. The stream supports a small fish population, and fish are seriously impacted by such pollutants, so reducing the pollutant levels in the stream is of great importance.

In addition through this project we flagged up a highly polluting outfall, which was then investigated immediately and rectified, having an enormously positive effect on the health of the stream.

Interpretation will be created to showcase the benefit of rain gardens for rivers, as well as access improvements in the woodland to allow more people to get close to the stream.

At the Houndsden Spinney it has thus far been impossible to collect road run off, so we have been unable to show an effect on water quality above and below the rain garden at this site.

Through our work alongside Thames Water and the EA to identify and rectify the misconnections blighting this site a significant improvement in water quality has been seen. We will soon be repeating invertebrate surveys to demonstrate this, along with public questionnaires which we hope will show an improvement in understanding of the urban water cycle and household misconnections.

The road inlet designs had to be amended to capture water running along the gully with a road section cut out to allow a deep enough fall into swale. This has been rectified and the majority of run off is now entering the swales as designed.

The SuDS features are currently drier than anticipated. The resilient sedges are thriving, as are unwanted terrestrial plants. This has additional maintenance implications until replanting of edge species next spring.

Originally a much larger wetland was planned at this site to clean water in the stream. However the project had to be significantly scaled back as we were unable to provide data needed to the EA to approve the scheme, as collecting this level data would have been prohibitively expensive. It would be better in future to allow for longer lead time on the project and budget far more for pre-project monitoring, however in this case it is still unlikely that we would have been able to fund the data required. Monitoring of schemes such as the Salmons Brook Healthy River Challenge is imperative to provide proof that SuDS are a positive element in the toolkit of approaches to tackle urban diffuse pollution. 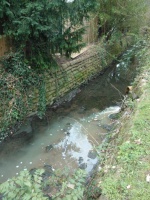