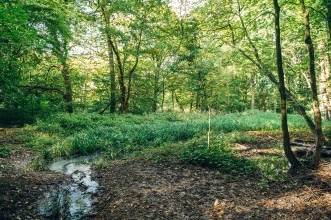 The water system in Grovelands Park, Enfield, has been artificially engineered over time, with a long stretch of the stream being contained in an underground pipe, hidden from view and useless to wildlife. Here beneath the ground two surface water drains from local roads and homes washed pollutants straight into the stream every time it rained. Plumbing misconnections added to the problem.

In spring 2014 we worked with the London Borough of Enfield to 'rewild' the water system in Grovelands Park. We created wetlands to intercept pollutants entering the stream in Grovelands Park. Flows in the surface water drains were diverted into shallow ditches, known as swales, and then into a wetland basin. The swales and basin were planted with sedges suitable for the semi-shaded woodland conditions. The plants use excess nutrients such as phosphates and nitrates to grow, preventing them building up in the water which causes the toxic algal blooms. The plants also oxygenate the water. Bacteria growing in the sediment and root systems break down oils and some bacteria can even reduce levels of heavy metals in the water. The clean water then soaks into the ground, as it would naturally, or overflows back into the stream. Rainwater washing off an area the size of 11 rugby fields is cleaned in the wetland. As we completed this project Thames Water ran misconnection surveys on the urban catchment, a vital piece of the jigsaw to ensure optimal results in this project.

At the same time the London Borough of Enfield naturalised 200m of the stream, breaking it out of its underground pipe and allowing it to find its own course meandering through the woodland. These two projects restored the water system to its natural state, better able to cope with floods and slowing high flows of stormwater, as well as treating pollutants.

The lake in Grovelands Park, Enfield is the centrepiece of a beautiful and grand garden for the ‘Southgate Grove’ mansion, designed in the 18th century and now a well-loved and popular public park. Sadly the lake is afflicted with pollution from a number of surface water drains, and toxic algal blooms are common in summer. Rainwater running off local streets brings with it oils and heavy metals from the road, as well as detergents and other chemicals such as phosphates and nitrates from misconnected plumbing. This pollution load limits the lake’s potential as a wildlife habitat and its appeal for park visitors.

In June 2015 we created a reed bed in the south western end of the lake to naturally break down these pollutants and increase oxygen levels in the water, as well as providing a new habitat for birds and insects. Coir rolls and hazel faggots were used to create an area of suitable depth to establish the reed bed. Coir mats pre-planted with reeds, rushes, sedges and colourful purple loosestrife and yellow flag iris were installed across the reed bed area, protected from wildfowl grazing by netting. As in the wetland, the plants use excess nutrients such as phosphates and nitrates to grow, preventing them building up in the water which causes the toxic algal blooms. The plants also oxygenate the water. Bacteria growing in the sediment and root systems break down oils and some bacteria can even reduce levels of heavy metals in the water.

Nitrogen is essential for river life but in excess can cause eutrophication. This results in reduced levels of oxygen in the water and may cause toxic algal blooms. Nitrate may be present as ammonia, nitrite or nitrate (measured together as Total Nitrogen), but nitrate is the most stable form.

Reed bed: The recently installed reed bed is already proving effective at removing nitrogen compounds from the water. There is a significant difference in water quality between the inflow above the reed bed (sampling location 1) and the sampling location immediately the other side of the reed bed (location 2) in total nitrogen, nitrate and ammonia. Total nitrogen drops from 7mg/l to 5mg/l, nitrate from 13mg/l to 4mg//l and ammonia from 1.6mg/l to 0.5mg/l. The improvement in water quality through the reed bed is greater than the improvement observed in the body of the lake. This is because the difference in water quality is larger between sampling sites 1 and 2 compared to between sites 2 and 3 (the lake outflow).

Wetland basin: The wetland basin is effective at water quality improvement because it prevents polluted water from two drains (sample locations 5 and 6) from entering the stream at site 4. Water entering the infiltration basin from the de-culverted pipe at sampling site 6 is consistently outside of acceptable concentration ranges specified by the Water Framework Directive. Ammonia is consistently present in levels deemed harmful to aquatic life in both inflow pipes (sample locations 5 and 6). Water only flows out of the wetland basin in storm conditions so it effectively prevents polluted water from entering the stream.

Coliform bacteria derive from faecal waste and are an indicator of pathogens in the aquatic environment. They enter waterways from misconnected toilets, sewage treatment plant overflow, domestic pets and agricultural run off.

Wetland basin: Water entering the wetland basin from the culverts at sampling sites 5 and 6 contains high counts of coliform bacteria, that are outside of guideline limits (under EC Bathing Water Directive). This is prevented from entering the stream (sample location 4) because water only flows out of the wetland basin in storm conditions.

The wetland basin is quite large, sized for greater flows than have been experienced so far. This means that the water in the treatment basin overflows only during very heavy rainfall events. This is not a significant problem, it just means that the basin is acting more as an infiltration basin rather than a temporary storage basin. The system still functions to prevent polluted water entering the stream.

The plug planted sedges in the basin are thriving in this environment as the system was not fully activated until the plants were well established. However in the more shaded swales with greater velocity of flows and concentration of pollution the plugs have failed and need to be replanted.

Sedges have grown lush and verdant in the basin and water is cleaned and returned to the stream as expected or returned to the water table. Although perhaps not as aesthetically pleasing as in the design, the boulder arrangement at the head of the swales has worked well to slow water and prevent excessive erosion in the swales.

Water quality issues were far more significant than we had anticipated on commencement of the project, particularly in relation to domestic misconnections. High pollutant levels were evident beginning of our swales. We also found that although we proved our systems had a beneficial impact on water quality, just downstream of each project were outfalls which would bring in yet more pollutants. Therefore wetlands and SuDS alone could not demonstrate catchment level water improvements needed under WFD. Small scale interventions have a place in a suite of wider measures that need to be tackled with more drive, especially pollutant impacts from misconnections and vehicle use.