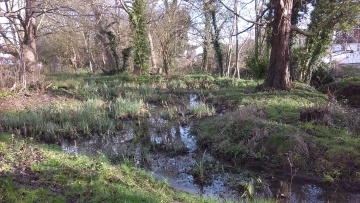 Thames21 has been working with Enfield Council, The Environment Agency and Thames Water to improve the health of the Salmons Brook and its tributaries. Enfield has a separate sewage system, meaning that surface water eg. rain running off roads and wastewater are carried in two separate pipes. As a result, pollutants enter the Salmons Brook in a number of different ways. Misconnected plumbing contributes nutrients such as phosphates and nitrates and coliform bacteria, road run-off inputs oils and heavy metals such as zinc and copper, and household and industrial waste is dumped into surface water drains.

The Glenbrook is a tributary of the Salmons Brook. It flows through underground pipes for much of its length. Hidden away it is damaged, and when it first emerges above ground it is already very badly polluted. Six linked wetlands have been created here to filter pollutants from the stream. The flow is directed through each wetland, being successively cleaned as it is slowed through the basins. Plants use nutrients such as phosphate and nitrate to grow, removing them from the water and stopping them polluting the stream. Bacteria in the soil and root systems break down oils and heavy metals. Once established the planted wetlands not only clean the water, they also add a new dimension to the habitat mosaic for wildlife, and give interest and colour for those passing by.

The Glenbrook wetlands were complete in September 2014 after three months of construction. Local volunteers helped to plant the wetlands in September 2014 and again in March 2015. The system is designed so that in low flow conditions a series of weirs direct all baseflow into the wetlands, whilst in high flow conditions a large proportion of the flow continues downstream and only the first flush is treated. The headwater of the Glenbrook which feeds this system drains an urban catchment of 42 ha. In addition, 15 gullies have been redirected from the roads that surround the site into the wetland treatment system through a series of swales.

Nitrogen and phosphate are essential for river life but in excess they cause eutrophication. This results in reduced levels of oxygen in the water and may cause toxic algal blooms. Nitrate may be present as ammonia, nitrite or nitrate (measured together as Total Nitrogen), but nitrate is the most stable form. Our water quality monitoring has shown that the SUDS basins are effective at removal of Total nitrogen, nitrates and phosphates. Water quality improves between sampling location 1 (the inflow to the SUDS) and location 2 (outflow from the SUDS), particularly in total nitrogen (dropping from 10mg/l to 6mg/l) and nitrate (dropping from 13mg/l to 7mg/l), bringing water quality within acceptable guideline levels (as defined in EA General Quality Assessment, Water Framework Directive 2014).

Coliform bacteria derive from faecal waste and are an indicator of pathogens in the aquatic environment. They enter waterways from misconnected toilets, sewage treatment plant overflow, domestic pets and agricultural run off. The SUDS basins are extremely effective at removal of coliform bacteria. Water quality improves between sampling location 1 (the inflow to the SUDS) and location 2 (outflow from the SUDS), with coliform counts dropping from approximately 1400 total coliform colonies to approximately 400 total coliform colonies, bringing water quality within acceptable guideline levels (under EC Bathing Water Directive).

Invertebrate surveys have also been carried out as part of this project. A masters student from Kings College London (KCL) undertook research into invertebrate populations at each of the project sites. Linking the invertebrate survey results to water quality data, the student predicted the impact/ potential impact of each of the SuDS/wetland schemes on population sizes and diversity over time. There was no existing data on invertebrates for the catchment before research was carried out. As predicted the invertebrate survey confirmed findings of poor water quality, with pollution sensitive taxa very badly represented. The study concluded that the SuDS have the potential to improve water quality and ecological outcomes downstream, but far greater efforts in reducing pollutants from vehicle use and misconnections will be required to resolve the problems of urban diffuse pollution.

At this site in particular we came across some levels of reticence from the local community to the project, mainly due to the significant changes to the landscape and lack of familiarity around SuDS, as well as a lack of understanding of why they were desperately needed. We overcame this by being very transparent and available, and in taking care of the site and the stream and making obvious improvements to its health and potential as a wildlife habitat. Regular communications in many forms were key. This became the site at which volunteer days were best attended by local residents. In future projects it would be ideal to spend a time in the build-up to the project engaging the community about water quality issues, rather than to do this simultaneously with planning the SuDS.

Water quality issues were far more significant than we had anticipated on commencement of the project, particularly in relation to domestic misconnections. Serious pollutant levels damaged the beginning of our SuDS system as Glenbrook. We also found that although we proved our systems had a beneficial impact on water quality, just downstream of each project were outfalls which would bring in yet more pollutants. Therefore SuDS alone could not demonstrate catchment level water improvements needed under WFD. Small scale SuDS have a place in a suite of wider measures that need to be tackled with more drive, especially pollutant impacts from misconnections and vehicle use.

We experienced some design issues which resulted from a lack of quality data pre-project, for example on flows. It would have been prohibitively expensive for us to get the data needed on this project budget, but it meant that some SuDS elements such as weirs required some costly remediation work. 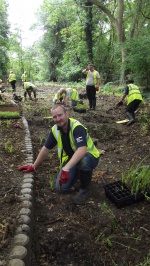