Case study:Giving up the Weed 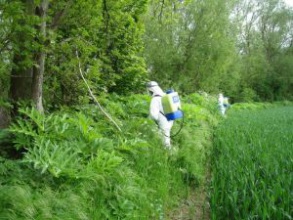 In November 2007, the Esmee Fairbairn Foundation granted funds to the Wye & Usk Foundation for an invasive weeds eradication project in the Wye and Usk catchments. The three year project was supported by the Environment Agency Wales, Countryside Council for Wales, Natural England and Keep Wales Tidy. Our catchments are under a very considerable threat from at least three species of invading weed. Rivers and streams are the ideal vector for carrying seeds and plants downstream. They can, however invade upstream via a number of vectors. Our concern is for the loss of biodiversity and, since these plants smother the native species that armour the river banks, the increased erosion that will occur.

The invading trio of species includes:

• Sap causes serious rashes when skin exposed to sunlight. Can cause blindness.

• Can be controlled by spraying, grazing, cutting or digging- up.

• Spraying with Glyphosphate (Round Up) is a successful treatment.

• Spread by rivers and seeds last 3 or more years.

• Female only in UK but can Hybridise with Himalayan Knotweed.

• Can be spread via small cut pieces.

• Can be sprayed with round up but can prove resistant.

• Can hybridise with Himalayan Knotweed which has male flowers.

• Can be treated by spraying, pulling or cutting.

Giving up the Weed: How the project operated.

The grant was used to pay for:

• Plotting of all Invasive weeds on a database as currently known and received from reports (years 1-3).

• Training five staff in the techniques of spraying (year 1).

• Eradicating Giant Hogweed in the Wye (Glasbury downstream for over 80km in the spring (Years 1-3).

• Eradicating all Himalayan Knotweed in both catchments (year 1).

• Eradicating all Japanese Knotweed starting from extremities of the Usk and Wye (years 1-3).

• Investigating the legal position in respect of liability for spread.

• Study the effects of fencing out buffer strips and the effect on invasive weeds.

The Esmee Fairbairn Foundation grant of £94,000 over three years was added to contributions from WUF, Environment Agency Wales, Countryside Council for Wales and Natural England to give a total budget of just under £150,000.

The project enabled the development of a logistical system to manage the massive problem of Giant Hogweed and Japanese Knotweed in the Usk and Wye. In the first three years, over 125km of double bank was sprayed for Giant Hogweed (4,000+ plants), with 337 stands of Japanese knotweed, 3 stands of Himalayan knotweed and 1 stand of Lesser knotweed also sprayed.

The project also extended to mink and Signal crayfish trapping in areas of Wales where water voles may still be present and WUF also publicised the spread of other invasives such as the Killer Shrimp (Dikerogammerus villosus), which have been found in Cardiff Bay and a lake near Port Talbot.

Since 2011, the invasive species eradication programme has continued with funding from Natural Resources Wales, Natural England, Beacons Trust and riparian owners. Enemy number one - Giant hogweed - has almost been seen off although seeds can remain in the soil for more than eight years. Vigilance is therefore required to ensure any emerging seeds are dealt with before developing into seeding adult plants.

Japanese knotweed is reducing following our regular autumn spraying and we have found that spraying when the plant is in flower gives a much greater chance of eliminating it. Checking for regrowth is an important part of it – we rely on anglers, walkers and owners to keep us informed of any new stands.

Thus far we have treated 3,336 stands of Giant hogweed covering over 455km river, 488 stands of Japanese knotweed, 4 of Himalayan knotweed and 4 of Lesser knotweed.

Once it seemed that Himalayan balsam (HB) would continue its spread unhindered. Not only was it extremely successful in spreading downstream (and even upstream) but it is spreading inland from rivers too. However, the warm, dry spring of 2012 caused seeds to sprout early and young plants were first hit with a sharp April frost, killing any early germination. Then successive floods throughout the year put paid to later plants within the flood zone. Plants further away from the river did well but not everywhere: the Monnow Rivers Association, assisted with funding from this project, have sprayed all HB plants in their catchment and all they have to do now is mop up any missed stragglers.

Eradication can therefore be achieved with determination but for owners of the many hundreds of miles downstream of an infestation, managing the HB on their bank needs to be considered differently: spraying a section can lead to seeds finding it even easier to germinate on bare soil.

Following trials over several years, these are our recommendations for managing HB in these circumstances:

• Cut or pull plants in June/July and leave them where they fall.

• Follow up in early September - there’s always one or two plants that survive or recover.

• Using a hedge trimmer makes this less of a chore. It also deals with brambles, grasses, nettles and small trees.

• The majority of next year’s infestation comes from the seed of plants growing in the immediate vicinity.

When balsam plants die back in autumn, none of the native bank armouring plants are there to resist winter floods. Controlling total balsam cover will therefore help to reduce erosion. When all the Hogweed and Knotweed is under control, we will be focusing our efforts solely against balsam.