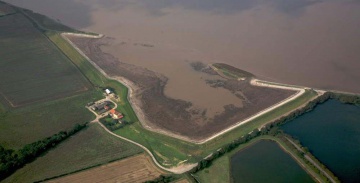 Associated British Ports (ABP) constructed a new Roll-on Roll-off terminal at Immingham Outer Harbour (opened in July 2006), which resulted in the direct loss of 22ha of intertidal mudflat area and potentially up to 5ha of indirect losses in a proposed Special Protection Area (pSPA) and a proposed Special Area of Conservation (pSAC). In consultation with regulatory bodies and local nature conservation interest groups, the two managed realignment schemes at Chowder Ness and Welwick were identified as contributing to a compensation package for the impacts of the above development. The initial objective of Chowder Ness was to create 10.5ha of mud and 0.8ha of saltmarsh to support a variety of invertebrate and bird species.

Chowder Ness was undertaken for the same purpose as another realignment on the Humber, Welwick, which is presented as a separate case study. Both schemes were designed and implemented by the same organisations (Associated British Ports (ABP) and ABPmer), and to very similar timescales and principles. To inform the final design of these sites, numerical modelling was undertaken based on LiDAR elevation data. This was to ensure the correct balance of habitats would be achieved. As mudflat creation was the main objective of the schemes, and as the sites were largely too high for this to occur, the land was re-profiled to increase the extent of lower areas where mudflat could develop (i.e. below Mean High Water Neap (MHWN)). These works included the creation of a gentle slope from the fronting, existing, mudflats to the rear of the sites to assist drainage.

At the 15ha Chowder Ness site, new flood defences were created at the rear of the site to a minimum height of 6.7m above Ordnance Datum Newlyn (ODN). Material for these defences was obtained from within the site from a combination of reprofiling and creation of temporary borrow pits (these were later infilled with material obtained from the seawall removal). The existing seawall was removed over a length of 570m (some 200m remain), to a level of around 1.6 to 2mODN. This removal, rather than the creation of solitary breaches, was chosen for a number of reasons: it improves connectivity with the wider estuary; it more closely recreates the type of environments that existed prior to the land claim; it enables the whole cross sectional area of the estuary including the realignment site, to respond to estuary wide changes; and it increases energy levels within the site, thereby improving the likelihood that mudflat habitat will be maintained (as mudflat creation was the main objective of the site).

As Chowder Ness was considered relatively small-scale in relation to the estuary as a whole any predicted changes to the hydrodynamics and sediment dynamics were expected be extremely localised and relatively small in magnitude (ABPmer, 2004).

The old defence was removed in a series of stages: (1) removing the rear of the embankment, (2) the concrete wave return, the bitumen and rock face, and (3) the overall lowering of the embankment (to levels around 1.6 to 2mODN).

Over 12 ha of mudflat were created. During 2006/2007, a total of 13 waterbird species were found to be using the newly created intertidal area. All target species established for the site were observed with one exception. Although the grassland and hedgerow are relatively new habitats six bird species were observed using the grassland of the newly created embankment during 2007, four of which held breeding territories. Again, all target species were observed with one exception. Welwick: The site covers a total area of 54 ha to the edge of the current saltmarsh in front of the seawall. Landward of the current defences the site area covers approximately 48ha, whilst the current sea defence accounts for 3 ha and saltmarsh in front of this covers 3 ha. A total of 29 waterbird species have been recorded with the realignment site having developed as a major roosting site for a number of wading birds at high water. With one exception, all target species established for the site have been observed.

In total, 66 ha. of farmland have been converted into new inter-tidal habitat to compensate for the 22 ha. of land lost due to the new port developments.

At a very early stage, an integrated plan, considering flood protection, nature protection and maritime transport including mitigation measures, was developed. When the plans were first put forward, there was strong resistance because of the habitat loss. Through extensive consultation and close co-operation with a number of environmental organisations, an outcome was reached that was acceptable to all parties. The process ensured that the environmental impact of the project was clearly identified and mitigation and compensation actions taken. This led to a legally binding agreement – the first of its kind in the UK – that meant that ABP had to carry out the agreed set of offsetting measures but that they would not have to face a lengthy and costly public enquiry.

Accretion: In order for the site to support both mudflat invertebrates and saltmarsh plants, it was important that fine marine sediments would be imported into the site, as these would provide the ideal environment for intertidal flora and fauna. Furthermore such sediment import would ensure that the site would continue to increase in elevation as sea levels rise. Observations from previous managed realignments have shown that sites can accrete relatively rapidly immediately after a breach, but that elevation increases then tend to level off. At Chowder Ness, site elevation monitoring has so far followed a similar trajectory. To date, overall, the site has increased in elevation with the main change in elevation occurring in the initial two years following the realignment.

Marsh development in the eastern corner – 1 year on, 2 years on, and 3 years on (bottom pictures demonstrating difference two months can make, with sea aster in bloom in the bottom right picture)

Dunlin feeding within the site