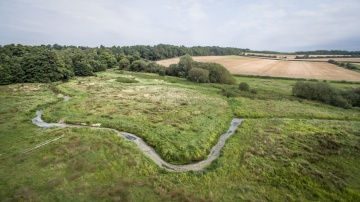 The Environment Agency are part of the Defra Group who aim to protect and improve the environment. Locally, our commitment to improving our rivers led to the development of the Test & Itchen River Restoration Strategy which identified measures to improve the physical condition of the rivers. In this, the Tichborne Stream was identified as requiring significant improvement measures to restore the SSSI/SAC and bring it into favourable condition. At the same time, the Trustees of the Tichborne Estate expressed a desire to remove silt from an on-line lake within the grounds of Tichborne Park. The lake falls within the River Itchen Site of Special Scientific Interest (SSSI). Subsequently, Aquascience Ltd, a company specialised in river restoration, produced an appraisal of the proposal to remove silt to investigate whether there were opportunities to benefit the SSSI features of the site. Aquascience’s investigations quickly recognised that the lake was a dominant component in the SSSIs unfavourable status. Their recommendations were to investigate the removal of impoundments and restoration of the chalk stream channel thus providing an opportunity to create a sustainable landscape with improved ecology which would rectify the issues identified as causing the unfavourable status of the SSSI.

This river restoration project is located on the Cheriton Stream (SU5733930218), a tributary of the River Itchen. The primary objectives of the restoration project were to create a sustainable environment to move the SSSI unit towards favourable condition and enhance the condition of the Special Area of Conservation (SAC) status by:

With this in mind Aquascience were employed to design a scheme which reinstated the river channel to a natural course in the flood plain, utilising relict channels wherever possible. The designs ‘off-lined’ the lake converting it to fen meadow and reed-swamp, two habitats which are features of the SSSI. The designs excluded any form of water level management structures and sought an outcome which would function as naturally as possible within this environment. One fixed impoundment and two adjustable sluices were removed. Overall, within the site 825m of channel were either reinstated, created or were enhanced with restored gradient and/or increased flows. In addition, a further 640m of channel were preserved as backwater features with connection to the main channel. The project was delivered in Spring 2017. This involved significant movements of excavated materials on site, many of which were used to partially fill the lake to create fen meadow. Material movements were undertaken using a mono-rail system and tracked dumpers working on bog mats. These measures ensured minimal impact on the terrestrial SSSI features. Trial holes had identified that a deposit of angular gravel was present throughout the project area at the desired elevation, thus relict features were simply excavated within their perceived planform down to the existing gravel. Sediment mobilisation was carefully managed throughout the delivery using a combination of managing flows within site channels, sediment barriers and the pumping of turbid waters onto flood meadows. Plant rich sward was stockpiled and used in the final stages of the project to instate characteristic plant material to the new channel banks and the fen meadow constructed within the lake. Channel profile and dimensions were designed after locating suitable reference sites up and downstream. However, the excavator operators were encouraged to be somewhat creative in the execution in order to create physical diversity in channel size and bank gradients.

Aquascience is a small company specialising in river, lake and wetland creation, restoration and management. Previous notable projects have included the Heritage Lottery funded (HLF) Itchen Navigation Heritage Trail Project and the urban river restoration project, Market Harborough on behalf of the River Welland Rivers Trust. Their role was to carry out an options appraisal, feasibility assessment and creation of subsequent detailed designs for the preferred option. They were also the principal contractor for the project. They have been involved at every stage of the project. Natural England were integral in the development of the project through the development of the Test & Itchen River restoration Strategy. They were a key partner in fulfilling the obligations to improve the condition of the SSSIs which is a fundamental objective of the England Biodiversity Strategy. Trustees of the Tichborne Estate and the landowners, Anthony and Catherine Louden oversaw the entire construction phase of the project. They contributed extensively to the options appraisal and development of the designs. Their vision for the site was evident and their commitment to the project was cemented with their substantial financial contribution to the works.

The first visit to Tichborne occurred in January 2014 shortly after Aquascience had been asked to look at the lake with a view to removing silt. The Tichborne Lake and River Restoration Feasibility Study was finalised in March 2014. The Tichborne River Restoration Design Rationale was finalised in April 2014 The process of compiling detailed designs was undertaken in the Spring of 2016 after which the applications for the Environmental Permit and Planning Permission were submitted. The project was delivered between the end February and June 2017.

One of the main objectives of the project was to deliver on the actions identified in the Test & Itchen Strategy. One action was to restore the stretch through weir removal to restore natural function. This has been achieved. Our objectives to restore natural chalk stream characteristics, remove obstacles, reduce/eliminate the need for human intervention and reconnecting the river within the floodplain are clearly demonstrable. The impounding structure and associated sluices have been removed and a characteristic gradient and sediment transport has been restored. The lake sediments have been off-lined from the channel system removing the potential phosphate enrichment of the downstream watercourse.

The final objective was to maximise the physical and ecological diversity. Fish surveys, invertebrate and crayfish monitoring have been carried out along with HABSCORE surveys which were conducted in order to monitor the physical habitat and track the changes that will occur as the channel becomes more established over time.

Jonathan Cox has provided information for the appropriate assessment and an assessment of the SSSI and the protected species. We also had an extended phase 1 Ecological Appraisal carried out by the Hampshire & Isle of Wight Wildlife Trust (HIWWT). Prior to this project this section of the Cheriton Stream had been heavily modified leaving a legacy of impoverished channels, a silt filled lake and a river that was disconnected from its flood plain. Please see the current site plan and proposed site plan drawings attached with this application. A significant achievement was met when the owners of Tichborne Park agreed to a significant landscape change to the park surrounding their grade II listed home. The lake had become a burdensome feature that would require significant resources to maintain. Once the agreement of the owners had been secured the designers and stakeholders of this scheme commenced with designs that aimed to restore a naturally functioning river channel. Some constraints existed, perhaps the most significant being the owners request that the river flowed close to the house to compensate for the loss of the lake. This entailed a diversion away from the natural path of the river for a small section of the project area. In all other areas channels were either created, reinstated or restored so that a natural path was achieved. Surveys have revealed a site now dominated by wild brown trout with eel, lamprey, bullhead and stickleback also present. Invertebrate monitoring has shown an abundance of gammarus, mayfly, stonefly and caddisfly to name a few.

Unfortunately, with the untimely death of Anthony Louden, it was deemed to be inappropriate to cover the project widely in the press as the family were already under great pressure. The extent of the project’s achievements in restoring the natural state and functioning of the river system is illustrated in the following table: Revived Relic Channel (m) Restored Channel with increased flow volume (m) Channel with Restored Gradient (m) Channels preserved as backwaters / seasonal flow channels (m) Upstream meadow 180 190 185 280 Lower meadow 195 75 260

Cloudbase Aerial Art, a specialist aerial media company, have successfully taken extensive before and after photographs through the use of drones.

An early challenge for this project was to influence the owners to agree to a major landscape change within the Grade 2 listed site. This was achieved by presenting to them the advantages of creating a natural and sustainable river system and the abandonment of an unsustainable and ecologically impoverished ornamental lake. Lesson learnt - engage early with the landowner.

The next challenge was to deal with the constraints of the site including: • Funding • Heritage • Ecology / SSSI features • Planning / permitting process • The moat

The planning process added approximately 6 months to the project. We did not foresee the challenges made during this process nor the length of time it would take to bring the process to a close. Conditions imposed added time and costs to the project.

Funding presented a challenge as is always the case with restoration projects. Funding was sourced from the EA, NE and the Trustees of the Tichborne Estate.

The ornamental moat previously relied on an outflow from the lake. This project incorporated a major restoration of the moat to isolate it from the Cheriton Stream. The heritage and ecological requirements were dealt with by engaging suitably qualified consultants so that the designs were suitable to achieve the necessary permits and permissions.