Difference between revisions of "Case study:Teglverksdammen"

This case study is pending approval by a RiverWiki administrator.
Approve case study
0.00 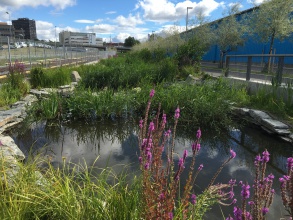 The Teglverksdammen is a reach of the stream Hovinbekken which opened in 2015. The project was initiated to improve the water quality downstream, as the downstream area (Ensjø) was to be transformed from an industrialized area to a new residential area. The Tegiverksdammen consists of a stretch of riffles and pools, followed by a large pond (called Teglverksdammen), a short river stretch (to become a wetland) and a final pond for sedimentation. After the final pond (Grensedammen), the river flows into the Ensjø area. The water in this system originates from an 800 m culvert, and part of the flow is still directed to the original culvert, to prevent flooding of the system. The water quality is typical of urban streams, with high nutrient levels and organic load.

Based on studies of the first year after opening, colonization of invertebrates mainly appeared to be from species drifting from upstream, rather than (except perhaps to a very small extent) from the other Oslo streams. (Refer to David Arnott's master thesis here)

Benthic algae, the first two years after opening, were a mixture of diatoms (mostly early spring and late fall), green algae and cyanobacteria. The main pond (Tegiverksdammen) had an extensive growth of filamentous green algae (Spirogyra) during the warm summer months, which also flourished after mechanical removal in July. The shallow parts of the upper stream reach also had a high production of benthic cyanobacteria, which broke off and flowed massively into the main pond as brown-black lumps on the surface. Whether these were temporary conditions due to the recent opening of the facility, or simply an effect of low water flows and depths remains to be seen. (Refer here to Karoline Dahl Myrstad's Master's thesis)

Due to maintenance requirements during the first summer after opening, the flow of water was shut down for approximately one month. During this period, the pools and ponds had still water, while the riffles dried out. The result of this was a massive increase in phytoplankton biomass in the main pond (Teglverksdammen). Other than that, biodiversity did not change significantly between the first two full years after the facility opened. (Refer here to Susanna Birgitta Diana Burgess's Master's thesis)

Monitoring of water chemistry at the inlet and outlet of the system during the first two summer seasons after opening showed the potential of the facility for some purification of the water, but it was partly dependent on time of year, on whether the water was flowing and on the nutrient concentrations of the water entering the system.