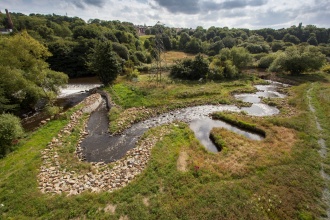 Water industry investment has transformed the water quality of our rivers over the last 25 years and morphology is now one of the significant challenges to return river life to as natural condition as they can be. Yorkshires industrial legacy of many modifications and weirs in our working rivers presents a significant challenge in meeting the Water Framework Directive (WFD)requirements for fish passage in main rivers, as well as the Humber River Basin Plan goal of having sustainable populations of migratory fish in all Yorkshire rivers by 2021. In the last three years Yorkshire Water has undertaken several projects designed to investigate how to tackle these barriers and other water quality issues. Rodley weir bypass channel is the first of these to be completed.

Rodley weir sits in the main channel of the River Aire, it has a head of 1.8m and presents a significant barrier to the movement both of migratory species, such as brown trout, lampreys, salmon and European eels, and other course fish movement within the river.

Choice of solution Since the weir could not be taken out and more natural processes restored in the river the highest quality solution was a bypass channel. Building of new river habitat has associated additional biodiversity benefits, and was chosen above an on weir fish pass ,which would have an ongoing maintenance cost associated with it, and would not provide any additional habitat for other species. The new channel was designed by our partners ARUP.

The route of the fish pass was heavily constrained by the presence of an overhead electricity pylon located on the left bank of the Aire adjacent to the weir and carrying 132,000V electricity cables, around which the utility provider imposed a 12m no-dig zone as well as a 6m height restriction beneath the cables. In addition to the physical constraints associated with the pylon, the ARUP design team’s challenges included complex hydraulic factors. Ensuring that a strong flow emerged from the fish pass was critical to attract fish to the entrance, whilst ensuring that the channel was deep enough and water velocities low enough for fish to advance upstream without becoming exhausted during migration flows.

Rock armour stone on the base and bed of the channel encourages heterogeneous flow conditions, provides crevices for refuge and protection against damage during high flow events. The design includes provision for maintenance with access to each side of the channel; a landscape and planting scheme was devised with the additional function of providing protection to the channel banks in the short term until vegetation was established. Redi-Rock wall blocks (precast concrete modular wall system with the look of natural stone) were used at the downstream entrance to the channel. This addressed the construction issues that were faced due to piling not being possible under the overhead services lines.

The land on which the pass was built was relatively low lying with a tall herb ruderal flora and subject to flood during high flows. The development of the project and design was done with regular meetings with various stakeholders including the Environment Agency, Rodley Nature Reserve, Yorkshire Water, ARUP and the contractors MMB .

Construction We broke ground on the project in Winter 2011/Spring 2012. Access into the site was restricted as the only route was via a narrow swing bridge across the Leeds-Liverpool canal, with a weight restriction of 25 tonnes. This constraint affected the size of equipment able to reach the site. Working in and adjacent to the River Aire during the wettest summer in 100 years also presented challenges for the project team. River levels would rise rapidly over a matter of hours so it was necessary for the team to monitor levels throughout the day, ceasing work if levels were too high , this resulted in materials and structures being washed away, followed by some significant rebuilding. The irony being that we avoided construction during the previous winter which turned out to be a dry and calm one! This led to additional time and a partial redesign to adapt the pass to high flows, and has resulted in an additional spend of around £350k on the project.

We reused all excavated materials on site creating raised bird hides and pond banks on Rodley Nature Reserve, thereby saving both disposal costs and landfill space, whilst increasing the biodiversity value of the site. The channel was completed in July 2013. The bare ground is under colonisation from Himalayan balsam which is regularly tackled by the reserve staff to allow a more native flora to colonise.

We set up a fish monitoring project which placed solar powered data loggers in the channel to pick up fish tagged this summer.

We are very proud of our achievement on this site and the delivery of an innovative solution to the problem posed by Rodley weir and meeting the WFD requirement for fish passage that supports a much higher biodiversity than any on-weir solution. It forms part of our commitment to “taking responsibility of the water environment for good” and our investigations into how to meet the regulatory requirements for healthy aquatic environments without putting up customers’ bills.

Preliminary data from 88 tagged trout show that fish can find and navigate the pass. We will review the data in spring 2014 to assess fish behviour in the channel.

The channel has colonised well with the hard work of Rodley Nature Reserve volunteers who have hand pulled Himalayan balsam to allow more native plants to flourish. The visitors and volunteers of the reserver report frequent sightings of dippers and grey wagtais and a male otter has moved into the site and is using the channel as a hunting station - indeed some of our tagged fish may have been dinner.

Equipment and materials are highly vulnerable to storms during construcion and their storage must account for 100 yr storm events.