From RESTORE
Jump to: navigation, search
This case study is pending approval by a RiverWiki administrator.
Approve case study
0.00

This is an integrated restoration programme in a Mediterranean catchment with a significant conservation value. R. Odelouca drains about 520 km2 and flows along 83 km from an altitude of 509 m, discharging at about sea level into the Arade estuary. The basin drains mainly schists and greywackes from the Carbonic period. The climate is Mediterranean with oceanic influence, with warm to hot, dry summers and cool, wet winterThe construction of the River Odelouca dam for improving water supply in the Algarve region of south Portugal, located in Natura 2000 protected area, involved the definition of a variety of compensation measures including environmental requalification of selected river segments not affected by the reservoir. We cover the whole sequence of the project: a) characterization and selection of reaches to rehabilitate based on the definition of physiographic units and the relative quantification of impacts; b) implementation of soil engineering techniques for improving riparian habitat, bank stability and to control invasive species c) defining best river channel habitat improvement options for endangered endemic fish populations using two-dimensional hydraulic modeling (R2D); d) post-project appraisal and monitoring of floristic succession, fish, benthic fauna and habitat .

Upstream reaches show well-developed riparian vegetation galleries dominated by alders Alnus glutinosa, willows Salix spp. and ashes Fraxinus angustifolia, but below the dam, in the considered segment, banks are collapsing because of the fluvial erosion and agriculture (with dominance of orange orchards) and the invasive giant-reed Arundo donax finds here the appropriate conditions to spread even if Mediterranean sclerophyllous and evergreen scrub as well as cork oaks are still the characteristic landscape. Fish assemblages include a pool of native species, where we face the reduction of two endangered cyprinids _Iberochondrostoma almacai and chub Squalius aradensis. Other native species are present like the loach (Cobitis paludica), eel Anguilla anguilla and Barbus sclateri occurs sparsely (Pires et al., 2010). The degradation of habitat and water quality have given an increasing role to the highly abundant mosquito fish Gambusia holbrooki, and pumpkinseed Lepomis gibbosus, largemouth bass Micropterus salmoides, chameleon cichlid Australoheros facetus, carp Cyprinus carpio, and straight-mouth nase Pseudochondrostoma polylepis. The American crayfish has extended also its dispersion area after the artificial reservoir. A laborious appraisal of the problem was assessed in all catchment by using different layers of information related to geology, climate and soil cover which allowed to define the physiographic units. Other layers containing descriptors of disturbance (habitat modification, roads, point and non-point pollution) allowed to define those units where rehabilitation should take place. The designed measures to stop the enlargement of the river channel, in the most critical reaches were based on soil engineering techniques after the convenient bank reprofiling, such as vegetated gabions and rip-rap and cribwall to stabilize the banks, whereas the invasive cane was controlled by a double-matt (organic and synthetic) of bio-degradable geotextile after clear cutting. In these places were also conducted an extensive plantation of riparian trees and shrubs to improve those measures and to control the advance of the invasive giant-reed. With that purpose plant material was collected in the area of the reservoir (before it was filled), and a plant nursery was created. Therefore there was a strict genetic control and plantation of trees (mainly ash trees and willows) and shrubs (such as Tamaryx and Oleander spp.) followed the observed longitudinal succession in previous surveys.

This study applied 2-D hydraulic simulations to evaluate the habitat improvement of two the two mentioned endangered cyprinid species, resulting from the implementation of distinct instream structures – i) placement of three islands in the middle of the river channel; ii) introduction of two lateral bays on opposite banks; and iii) introduction of four alternate current deflectors - in a modified river reach of a Mediterranean river. Though the use of such instream structures has been considered in many habitat improvement projects (e.g. Vehanen et al. 2003; Garcia de Jalón and Gortázar 2007), no previous analysis of their potential effectiveness on fish habitat has been carried out in non-salmonid rivers. This information can prove extremely useful elsewhere, namely in other Mediterranean-type rivers, where the implementation of instream structures and compensatory measures as a means of recovering other threatened fish populations has been questioned. The River2D model (Steffler 2000), was used with this purpose: This finite element model simulates hydraulic conditions from topographic data input and uses the habitat suitability index curves containing known fish biological preference data, to calculate the potential habitat for specific life-history stages by the Weighted Usable Area (WUA). The habitat improvement measures were concluded in the end of spring 2012, and monitoring to assess its efficiency was conducted in specific periods in 2013 and 2014, which were compared to the previous situation. Such monitoring considered the succession of floristic communities in the river corridor, as well as in the aquatic habitat, where the surveys included benthic communities and fishes. In both years all sites were electrofished (DC, 300–700 V) during late spring−early summer base flow. In this period stream flows were lower (but still had full connectivity between habitats), thus ensuring a higher fishing efficiency (Oliveira et al., 2012). Electrofishing distances followed CEN standards for assessing fish species composition and abundance for wadeable sites (CEN, 2003). This distance was at least 20 times the mean wetted width of the channel to encompass complete sets of the characteristic stream form (e.g., riffles, pools, runs) with a minimum sampled length of 100 m. The entire widths of streams were fished by wading slowly upstream during daylight, using natural barriers, mostly shallow habitats, to delimit survey zones. To compare changes in fish communities and to evaluate the biological quality of sampled sites we used the fish-based index of biotic integrity for Portuguese wadeable streams (F-IBIP) (INAG and AFN, 2012).

In the two-year study it was collected 11 species of fish (seven native, three exotic and one translocated taxa), representing a total of 4521 individuals. In both years fish communities were clearly dominated by three species (A. anguilla, C. paludica, and G. holbrooki), which represented more than 70% in almost all samples. The populations of native cyprinids have always represented a small fraction of the communities, although they were present in all 2011 sites; however, these species were absent from segments E and K in 2012, the most degraded stream reaches of our study. The abundance of alien species varied considerably between segments and years, but generally represented a relevant proportion (> 25%) of the total species. Our results also seem to indicate a dispersion of the translocated species P. polylepis – an endemic species to central Portugal – with the number of occurrences increasing from 2011 (one site) to 2012 (three sites). Thus, independently of the year of study, all segments presented highly degraded fish communities, dominated by very tolerant species, with low proportion of native invertivores cyprinids and native lithophilics, and with a significant presence of alien forms. Results of the F-IBIP calculation reflected these observations, with all stream reaches presenting bad or poor biological quality in both years; in three of the segments (E, K, M) the F-IBIP score was even lower than in 2012, decreasing from poor to bad.

The success of the defined measures was hampered by three principal factors, firstly failure to engage local landowners early in the programme; the timing of key tasks, such as planting riparian trees; continued difficulty to control sources of environmental disturbance, in particular serious and continuous point pollution from animal husbandry. Consequently fish assemblages in all stream reaches were still dominated by aliens and highly tolerant species, and native cyprinids were low abundant or absent, revealing the fish index of biotic integrity a low environmental quality.

restored section: invasive species were erradicated and replaced by a willow after a cribwall structure

Exotic species (giant reed) were replaced by willows, after cutting of invasive species and stabilization of bank with cribwall 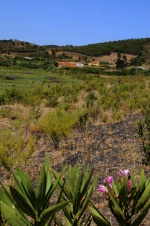