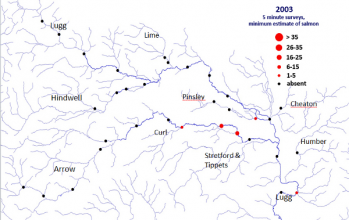 Our first walk over survey of the upper Wye (1995/6) showed that over 50% of all available spawning habitat for salmon (by area) and over three quarters of trout spawning habitat was barred to ascending fish. A combination of neglect and poor regulation had allowed weirs, badly designed crossing points and road culverts to be built without the requirement for free passage of fish. These were the main culprits but huge debris dams had also formed on an alarming number of tributaries, completely sealing off hundreds of kilometres of essential spawning and nursery habitat. For salmon this was disastrous and the main cause of their decline, particularly the loss of the Lugg and its tributaries in the 1980s.

Small populations of brown trout remained above the blockages but the larger main channel residents, which provided the bulk of the egg deposition, were prevented from reaching the ideal (smaller) sized tributaries. The extent of the decline of brown trout as indicated by juvenile densities was even greater than that of salmon in the Wye by 1996.

Between 1996 and 1997 the Foundation embarked on a programme to reopen the tributaries of the upper Wye. The experience of the Tweed, North Esk and elsewhere showed that this is the single most cost effective way of increasing fish populations. The programme took two years, including surveying, and reopened 132km of salmon and 330km of trout spawning areas. Since then, the work has continued and as of 2013, there are just a few sites on the lower Usk, Wye and Lugg that require fish passes.

After this initial effort, the Foundation has continued opening or reopening Wye and Usk streams and rivers in the projects: WHIP , pHish , UP! , Leader+ , Lugg & Arrow, Radnor Foal and ART/Defra. The current and historical situations are detailed on the maps below which show the extent of the Wye and Usk catchment upstream that was blocked to migrating fish in 1972.

The Lugg and Arrow (the Wye's largest tributary system) had numerous barriers, built in the 18th and 19th centuries to control flooding and erosion, and to provide a water supply for agriculture and milling. Until the early 1980s, the catchment was accessible enough to enable up to 3,000 salmon redds to be recorded in a winter. However, in 1982 the Leominster Flood Alleviation Scheme sealed off the Lugg and the run dwindled to a few persistent pairs of salmon. This was partially corrected with a modern Larinier fish pass built at Hampton Court in 2003 and with two passes at Leominster in 2004.The next phase was to secure full access over the historic weirs and this will be completed in 2013.

In 2004 we turned our attention to the Usk and found that while the river above Brecon is mainly unobstructed, the catchment from Brecon to Abergavenny is as bad as on the upper Wye in 1995 with every major tributary having at least one serious obstruction. Our tour de force was the construction of a fish pass in 2006 on the Cynrig – a stream that collects its rainfall from the steep slopes at the top of the Brecon Beacons.

• 2011 EA Wales breaches and removes the weir at Kentchurch, opening up a huge spawning area on the Monnow system as a result.

• 2013 Passes at Downfield and Mahollam (Arrow) completed and temporary easement at Dayhouse (Lugg).