Great Britain contains a significant quantity of the known breeding populations of freshwater pearl mussel in Europe. The PIP Project has crucial implications for the whole of the EU. Without this project, it is likely that mussel populations in Britain will continue to decline with possible extinction in many rivers. Given the importance of the British populations in a European and global context, their loss would have a catastrophic impact on the overall survival of the freshwater pearl mussel in Europe.

It is essential that we work together to improve our water courses to give this amazing animal a chance of survival. This ancient and internationally protected species cleans our rivers and can live for over 100 years. Improving watercourses not only helps freshwater pearl mussel, it also benefits the whole river ecosystem. PIP will raise awareness of the issues and work with local communities, landowners and managers to make changes that will safeguard the future of the freshwater pearl mussel.

‘Pearls in Peril’ (PIP) is a UK wide LIFE nature project with 22 partners working together to restore river habitats benefiting freshwater pearl mussel and salmonids (salmon and trout). The project was approved by LIFE in September 2012 and will run until September 2016. A total of 48 actions will be delivered across 21 rivers designated as Special Areas of Conservation (SACs) for freshwater pearl mussel.

The freshwater pearl mussel (Margaritifera margaritifera) is declining dramatically throughout its range and is under grave threat within Great Britain. Mussel populations have been affected by multiple issues, including wildlife crime, habitat degradation and declining water quality. This project will help to safeguard the future of the most important pearl mussel populations in Great Britain by tackling these threats and implementing best practice conservation methods. The project has the following aims:

1. To RESTORE the habitat of freshwater pearl mussels and salmonids in selected river catchments within Great Britain.

What are we doing to RESTORE habitat......

We are promoting and facilitating the use of suitable agri-environment schemes by land managers and are using these schemes to implement riparian tree planting and the fencing of river banks to improve bank stability and reduce silt input to the water course.

Sites have been identified for in stream restoration that will most benefit pearl mussels and salmonids (Atlantic salmon and trout). This involves seeding river beds with gravel and removing artificial river structures such as croys and weirs to reinstate river bed habitat for juvenile mussels and fish.

In areas where commercial forestry takes place, and which was planted prior to the use of current good practice guidance, silt run-off can cause significant damage to potential freshwater pearl mussel and salmonid habitat. Riparian tree planting using native broadleaves will occur and man-made drainage ditches will be blocked to reduce silt and nutrient run-off and improve water quality.

Some catchments have high levels of silt and nutrient enriched water draining off the slopes into the river. A series of strategically positioned ponds and wetlands will be created to intercept enriched run-off before it reaches the river to improve water quality.

How do we SECURE the long term survival of freshwater pearl mussel.......

A seasonal Riverwatcher is employed to develop a ‘riverwatcher’ scheme in selected catchments within Scotland where illegal pearl fishing and unauthorised river works are still a threat. The scheme will raise awareness of the threats to the freshwater pearl mussel and will undertake coordinated action to prevent and report illegal activity.

In some rivers pearl mussel populations are too small for natural recovery to be guaranteed. The PIP project is collecting mussel larvae (glochidia) and introducing the larvae onto the gills of young salmon and trout (encystment) to mimic the natural lifecycle of the mussel and increase the juvenile freshwater pearl mussel population.

What tools are being used to COMMUNICATE........

To promote awareness of the freshwater pearl mussel amongst the younger generation an educational programme 'Pearls in the Classroom' is being delivered across selected catchments. This will also help to deliver the objective of securing populations by encouraging local families to recognise the damage that illegal activities can cause.

A range of dissemination events will take place throughout the project. These will focus on different audiences and will raise awareness of the actions taken during the project and how they can be applied more widely.

It will include the delivery of presentations, seminars and interpretation material and the organising of a final project conference.

Monitoring work is being implemented to ensure the project delivers its expected results as well as adequately monitors the project impacts. Monitoring will include: •water quality; •habitat; •freshwater pearl mussels; •host salmonids; and •levels of uptake and implementation of habitat restoration measures.

- Facilitate and implement improved riparian habitat in the River Naver - work with land managers to develop SRDP riparian planting schemes on the River Naver, focusing on the restoration of wooded riparian zones through a combination of natural regeneration and planting of native tree species.

- Implement in-stream restoration works in the River Naver - the targeted removal of man-made structures, which are known to be impeding natural sediment transport and flow patterns, will be completed in the main stem of the Rivers Naver and Mallart. In-stream restoration will be undertaken at six priority sites and will include developing detailed design plans, managing contractors to deliver the work and pre and post monitoring of the sites to assess their impact. The actions are likely to include the removal or disruption of weirs, the reconnection of flood flow channels, restoration of alluvial fans, and the removal of hard bank protection and in-stream croys. 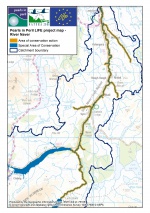