‘Pearls in Peril’(2013-2017) was a UK-wide project to safeguard the future of the freshwater pearl mussel (FWPM), a species critically endangered in Europe. This project focused on the most significant populations in Great Britain and addressed the species’ most significant pressures. One of the key rivers targeted in Scotland was the River Dee in Aberdeenshire, designated as a Special Area of Conservation with internationally important populations of FWPM and Atlantic salmon, a key species involved in the mussels’ lifecycle.

In the Dee catchment, the project aimed to tackle 3 main issues affecting FWPM:

The project identified sections of the River Dee at Banchory, Aboyne, Sluie/Commonty , Braemar (Mar Lodge)and the Slugain Burn for in-stream restoration works. Works were directly funded through the Pearls in Peril Porject. The River Dee at Banchory, Aboyne and Sluie/Commonty was characterised by numerous croys. The croys were mostly built during the 1990s, using instream boulders, to improve conditions for salmon fishing. However, the croys proved ineffective for fisheries improvements, and in addition to damaging the riverbed habitat when they were built, they also resulted in scour and changes to substrate composition. Pearls in Peril has removed a total of 27 croys and re-distributed the boulders back into the river channel. This work has restored approximately 18,000m2 of river bed habitat. The removal of the croys, in particular the larger paired croys, creates more natural channel hydraulics and sediment transport. Replacement of the boulders from the croys on the bed has covered approximately 25% of the main sub-reach and will benefit freshwater pearl mussels through stabilising the bed substrate and creating hydraulic refugia. Boulder placement also provides these benefits and improves habitat for juvenile salmon.

The Car Bank, Mar Lodge, Braemar was an embankment constructed in the 1980s with a range of materials including local spruce trees, railway sleepers, corrugated iron, approx. 30 old cars, large quantities of concrete, rocks and boulders. Corrugated iron facing has been used so that ice would be less likely to become pinned up against the embankment. Pearls in Peril has undertaken controlled removal of the waste materials and re-profiled 90m of bank, thus re-connecting the River Dee with its flood plain and restoring natural process that will improve habitat for freshwater pearl mussels and salmonids.

The lower reach of the Slugain Burn, a tributary to the Dee just east of Braemar, had been subject to historical alteration including straightening and dredging, and was heavily constrained by embankments. To restore connectivity with the adjacent floodplain and help re-establish natural processes, embankments were removed and relict channels reinstated.

Pearls in Peril worked with farmers along 4 major tributaries to the River Dee, to secure the creation of buffer strips and other beneficial management along watercourses to mitigate diffuse pollution from agricultural sources. The targeted burns were located in the middle reaches of the catchment, characterised by improved farmland, mixed cropping and livestock production. The main funding source for the works was through Scottish Rural Development Programme (SRDP) agri-environment schemes, with project officers supporting farmers to apply for the funding. Where such funding was not feasible, Pearls in Peril bridged the gap through direct financing of works.

In total, 38km of water margins were fenced off to prevent livestock accessing banks and causing erosion by poaching and dunging in the water. A generous riparian buffer will also aid catching of run-off, mitigating diffuse pollution from agricultural operations in the field. In many cases, alternative waterings for livestock were installed, usually in the form of troughs connected to a piped water supply, and where this was not feasible, solar powered trough pumps were utilised. Management of land adjacent to watercourses was also modified through some agri-environment contract, such as sensitive grazing of wetlands and habitat mosaics, leaving stubble on arable ground overwinter and establishment of green cover crops to prevent run-off.

In the River Dee, water temperatures have risen by an average of 1.2˚C since the 1970s. Projected further increases could cause fish mortality; therefore protecting the freshwater biodiversity of the river is a priority. Planting trees to shade the water is an obvious method of working towards ‘future-proofing’ the upper catchment against these climate-change trends. On Upper Deeside, the objective was to work with farmers and estates to establish woodland along tributaries.

Several estates and farms participated by planting SRDP-funded riparian woodlands, covering over 31 km of bankside. Large, deer-fenced enclosures are the preference for establishing a viable woodland habitat. However, where tributaries are located within game management areas of sporting estates, an alternative was required: small stock-fenced tree enclosures have been used as a compromise to fill the gaps. The enclosures work on the principle that the density of trees in 1.2m shelters in a confined space deters deer from jumping in – 20 native trees are planted in a 4mx4m enclosure. Although browsing of edge trees will occur, trees in the centre will be protected. Enclosures are spaced along key watercourses, concentrating where possible on stretches where maximum shading of the river can be achieved. In addition to creating shade, trees also help stabilise banks, reduce run-off and add leaf litter and woody debris.

Over 1000 small enclosures have been erected along Upper Dee tributaries, benefiting over 30km of banks. Enclosures have generally been well received by their ‘hosting’ landowners, all of which are large sporting estates. Members of the public have welcomed the prospect of trees becoming established in these landscapes.

The small tree-enclosures are experimental. However, they are facilitating the return of native trees to several Deeside glens that have been devoid of tree growth for generations. Any trees established successfully in these upland glens will hopefully provide a seed source for the future. In total, ~113,370 tress were planted.

Monitoring work is ongoing and being completed by the Dee District Salmon Fishery Board (electro-fishing, temperature loggers, habitat survey) and the James Hutton Institute (fixed point photography of morphology sites).

At the morphology restoration sites, monitoring was limited to before and after surveys, although general habitat and electro-fishing work carried out by the DDSFB may pick up trends in the future. Establishment of riparian tree cover however is slow, especially in upland areas: monitoring of these longer-term projects is often overlooked, as it can require significant resourcing. However, it is essential to demonstrate that the restoration work is having the desired effect, and in this case monitoring will help guide further tree planting projects.

On the Dee, the monitoring includes continual recording of the water temperature (every 15 minutes) at 20 sites within tree planting zones and at 20 control sites away from the tree planting. In the longer term, this will highlight the extent to which riparian shade can reduce the extreme summer temperatures. It is also expected (and hoped) that these trees will boost salmonid production and prevent further declines in juvenile fish densities that may otherwise arise from warming waters. Therefore, annual surveys of fish numbers, using electrofishing, are carried out at both tree planting and control sites. Increases in fish numbers, and the wider benefits to the river habitat, are also expected to benefit the local pearl mussel population over the long term.

• Solid pre-project ground work is crucial to ensure project targets are realistic and efforts are concentrated where needed. Similarly, it is important to have good local networks & connections for project officers to contact and work with land managers

• Reliance on external funding (i.e. SRDP) for implementation was an issue: the project had no control over how this funding is allocated. As the farmers had to apply for and deliver the works, they had to take all the risks associated with delivery, which caused some reluctance to participate.

• Scoping of barriers long before implementation, such as conflicting land designations, pre-existing management restrictions , other biodiversity and archaeology interest is very important to limit snags during delivery.

• Where works were carried out using project funds, it would have been beneficial to provide contractors with templates of the information required during the procurement process, to allow them to meet the mandatory requirements more easily. 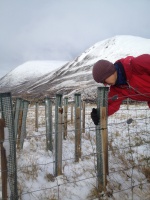