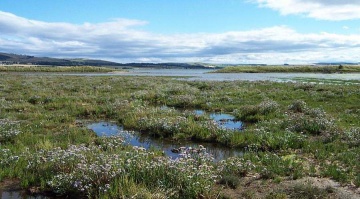 Promoted by the RSPB and the Scottish Environmental Protection Agency with the aim of creating important habitats for wildlife at Meddat, while also reducing maintenance requirements for the existing and failing defences.

This was the first planned realignment in Scotland and involved making two 20m-wide breaches in existing sea defences to allow the top of the tide to flood a 25ha field. This field was the last area of Nigg Bay to be land claimed (in the 1950s) and a secondary sea wall was already in place; this needed repairing and raising to a 1 in 50 year standard in advance of tidal inundation. The soils adjacent to the wall were suitable for use to build up the wall where required (on average by 10-20cm, over a length of 860m). The site was prepared by culverting drains which linked to adjacent fields, topping and grazing to reduce the amount of terrestrial vegetation, and the removal of trees. No internal earthworks were needed to create a creek system as a relict creek was still present. Approximately 2/3 of field is inundated at spring high water.

The site is owned and managed by the Royal Society for the Protection of Birds (RSPB), and forms part of its wider Nigg Bay reserve. This reserve incorporates extensive areas of mudflat, saltmarsh and wet grassland (RSPB website, 2011).

A range of monitoring studies were undertaken to describe ecological development of site (i.e. surveys of overwintering waterbirds, benthic invertebrates, vegetation and sedimentation/erosion patterns) as well as impacts to saltmarsh habitats and benthic invertebrate communities outside the breached area.

A PhD study investigating sediment characteristics and invertebrate colonisation reported the following results from monitoring the site during the first three winters post implementation (with the caveat that the realignment sampling points were higher in the tidal frame than those on the reference intertidal flats) (Crowther, 2007):

(1) The particle size of the sediments in Nigg Bay realignment site was significantly smaller than that of the (fronting) reference intertidal flats (mostly silts compared to mostly fine sands) – this was attributed to the sheltered environment and limited wave exposure within the site.

(2) The organic matter content of the sediments on the reference intertidal flats was less than 1%, whereas within the site, it was 46.6% in the first winter, and 27.2% in the second. The author highlighted that ‘organic matter is usually associated with fine grained sediments (…), so the sediments in [the site] are likely to have provided a large surface area for colonisation by micro-algae’. Furthermore, the higher organic content during the first winter was described as ‘not surprising given the large quantity of vegetation that had been killed following the re-establishment of tidal conditions’. A significant positive relationship with elevation in the tidal frame was found for the percentage organic matter in the sediments during the second winter. The author theorised that such high organic matter content of the sediments ‘may have caused hypoxic conditions due to the increased biological oxygen demand of the sediments’, however oxygen content was not measured (and the presence of hypoxia hence not determined).

(3) The following four invertebrate species were found to be most abundant within the site three years after the re-establishment of tidal conditions: Corophium volutator, Hediste diversicolor, Hydrobia ulvae and Macoma balthica. All of these were also noted as colonists in the first year, and also found to be the most abundant species on the adjacent reference marshes. The presence of M. balthica during the 1st winter was considered unusual, as it is usually considered to be relatively immobile. It was theorised that this could have resulted, at least in part, from wind or wave-driven immigration. The presence of C. volutator and H. diversicolor was (amongst others) attributed to the high organic content of the sediments. Intertidal invertebrate densities within the site were generally lower than the reference intertidal flats; which was mostly related to the higher elevations of the realignment site.s well as impacts to saltmarsh habitats and benthic invertebrate communities outside the breached area.

By 2005 the area had developed into three distinct zones:

(i) an upper zone, which is rarely inundated and retains terrestrial grassland;

(ii) an intermediate zone, which has been colonised by salt marsh species; and

(iii) a lower zone, which experiences regular inundation and in which terrestrial grassland has been replaced by fine sediments. Nineteen species of waders and wildfowl were recorded using the site during winter 2004/05, the commonest of which were redshank (RSPB, 2005).

Sea aster in bloom; view across site towards one of the breaches (Taken by: K. Chisolm, RSPB, 2007)