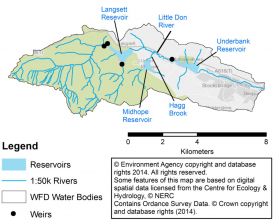 The Little Don rises in the Peak District National Park and joins the River Don just south of Stocksbridge town, a river length of about 20km. Flow in the watercourses are heavily regulated and managed by three reservoirs and several smaller impounding weirs. The reservoirs are operated by Yorkshire Water, with Langsett and Midhope reservoirs being operated for water storage, and Underbank reservoir for a compensation flow release.

Langsett and Midhope reservoirs modify the downstream flow regimes by buffering the range and magnitude of flows. As a result the baseflow is lower than would be expected naturally and the timing and magnitude of autumn/winter high flows is dependent on the levels in the reservoirs during this time. A compensating flow is released from Underbank reservoir (the bottom reservoir of the group), although analysis of catchment inflows and rainfall patterns has shown this to be too high, a legacy of the industrial use of the Don catchment. Other Yorkshire Water reservoir compensation flow release trials have demonstrated that modifying flows to more naturally flow regimes can improve the quantity and diversity of the ecological community. The Little Don is defined as a Heavily Modified Water Body (HMWB) under the Water Framework Directive and assessed at moderate ecological potential, with an objective to improve to good ecological potential by 2027; this WFD objective is the main driver for the scheme.

Barriers along the Little Don have been observed to significantly reduce ecological connectivity with large proportions of the watercourses under-used by trout and other fish. Whilst the barriers restrict the movement of coarse sediment, studies were inconclusive on the extent of the problem. Additional pressures within the catchment include water pollution (including minewater discharges) and invasive non-native species (such as the New Zealand mud snail).

2. How the scheme was developed

The Don Network plan originally included wide consultation, the outcomes of which included an action on the Environment Agency and Yorkshire Water to investigate these pressures further. Funding has been sourced through the water industry National Environment Programme for action by Yorkshire Water to reduce the environmental pressures caused by the operation of the reservoirs, particularly to the flow regime of the Little Don.

A working group composed of representatives from the Environment Agency and Yorkshire Water developed a range of options, focusing on confirmed pressures and those directly linked to the reservoirs and impoundments; flow regulation and barriers. The Coal Authority led on plans for the construction of a minewater treatment plant.

The Environment Agency’s Yorkshire and North East regional fish pass prioritisation project identified a number of priority actions to improve fish passage. For example, installation of a fish pass on a weir used for industrial water supply would double the length of the Little Don accessible to fish from the River Don.

3. What the scheme will deliver

Action to improve flow regulation: These aim for the best possible flow regime downstream of the reservoirs without impacting on water supply. Yorkshire Water are appraising the costs and benefits of a range of options to provide more natural flows downstream of Langsett, Midhope and Underbank reservoirs.

Action to reduce barriers: Flow changes alone would not solve the problem as barriers would continue to limit the migration of fish and modify the flow character of impounded reaches along the Little Don. The working group developed a range of barrier mitigation measures to either remove the weirs or install fish passes where this was not possible. Fish passes for the reservoir dams have not been progressed as costs are significantly higher than benefits. Action to improve water quality: Water pollution from minewater discharge between Langsett and Underbank reservoirs has been reduced through the construction of a minewater treatment plant by the Coal Authority. The Environment Agency, Yorkshire Water, and Highways England are to trial a solution to deal with the small residual minewater discharge not currently being pumped through the Coal Authority’s treatment plant.

It is also expected that Yorkshire Water’s work with ‘Moor for the Future’ on grip blocking will further improve water quality.

The Don Network has actions in place to promote water quality solutions downstream of Underbank reservoir:

The expected benefits of a more natural flow regime would be:

Mitigating the barriers is expected to have a range of benefits:

Options appraisal identified that building a fish pass upstream of Langsett reservoir, was cost beneficial. Whilst quite a modest option compared to the range of measures assessed, this option was favourable since the fish pass would allow about 5 km of under-used habitat to be accessible to brown trout and other fish currently living in Langsett reservoir. This measure will be in place by 2020.

Fish monitoring is taking place upstream and downstream of the new fish pass at Langsett. Yorkshire Water have also tagged fish to see if they approach the weir and what time of year. Walkover survey has been carried out with Yorkshire Water, Don Catchment Rivers Trust and the Environment Agency between Langsett and Underbank to identify issues and possible solutions. Monitoring will also be done before and after actions in the next water industry National Environment Programme.