From RESTORE
Jump to: navigation, search
4.00 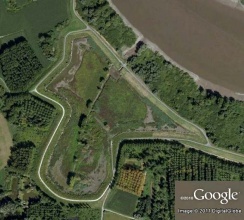 The University of Antwerp leads the research and management of the project. The research fits mainly in the framework of OMES (a multidisciplinary research study on the environmental effects of the SIGMA plan on the estuarine environment of the Belgian part of the Scheldt), which is funded by W&Z (the Flemish Agency for Waterways and the Brussels-Scheldt Sea Canal).

The Lippenbroek Regulated Tidal Exchange (RTE) scheme is a pilot scheme for the so-called controlled reduced tide (CRT) concept which Belgian authorities are planning to apply to (sections of) numerous flood storage areas in the near future to create tidal habitats (e.g. at Kruibeke, where the first inundation will likely occur in 2011). The CRT concept involves the use of two exchange mediums, one high inlet medium (e.g. a weir/spillway or sluice/culvert), and a lower outlet medium, which may be capped with a gravity controlled sluice gate. As the CRT technique is relatively new, it had to undergo thorough testing before it could be applied on a large scale. For this reason the 10ha Lippenbroek scheme was implemented in the freshwater tidal part of the Scheldt Estuary in 2006. As it was to be a pilot for CRT in a flood storage area, construction included the building of an overflow dike as well as a high inlet sluice for the CRT function.

The high inlet sluice (see pictures below) has an invert level of approximately 4.8mTAW (the Belgian Ordnance Datum) – which equates to approximately 1m below the level of Mean High Water Springs (MHWS). The inlet structure is 12.75m long; the three culverts it contains are each 0.75m wide and 1.1m high. Shot beams front the inlet structure and enable fine-tuning of the invert levels.

The most suitable sluice configuration was determined through several test wettings. For the outflow, a pre-existing outfall sluice, which is about 10m to the left of the inlet sluice structure, is utilised. Its invert level is at 1.5mTAW; the pipe is 40.2m long and has a 1.5m diameter. An artificial creek was dug connecting the inlet sluice level with the existing polder ditch. The danger of channels short-circuiting was diminished by subduing the channel along the foot of the ring dike(personal communication with Tom Maris, University of Antwerp; Cox et al., 2006). An intensive monitoring programme was initiated, and the first results are now available.

Sedimentation: With respect to sedimentation, Maris et al. (2008) point out that whilst sedimentation is on the one hand desired in tidal marshes there are also associated negative implications. The input of fresh sediment enables the advancement of typical marsh morphology and marsh soil, which in turn promotes the establishment of estuarine vegetation and fauna. Conversely excessive sedimentation is to be avoided in a flood storage polder, as this leads to decreased water storage capacity. Due to the enclosed nature of a flood storage polder, the environment is less dynamic and thus the potential for sedimentation is increased, particularly during longer stagnant phases. At Lippenbroek, at all but one of the 10 sedimentation measurement sites, net sedimentation was observed between March 2006 and November 2007, varying between 0.5 to 12.5 cm/year.

Fauna: Macro invertebrate monitoring shows that there has been a shift from terrestrial species to more aquatic and estuarine species (Maris et al., 2008). With regards to birds, despite the high degree of disruption by humans (including site visitors,cyclists and walkers on the dike), a clear change in the numbers and species of birds using the site could be observed when compared to baseline conditions. Of the 4,089 individuals observed during the first year of monitoring, 30% were benthic foragers (19 species), 54% wetland-generalists (11 species), 8% terrestrial generalists (18 species) and 8% woodland birds (13 species). Occasionally night herons Nycticorax nycticorax and spoonbills Platalea leucorodia were observed feeding (Maris et al., 2008). In order for a CRT to fulfil a role for fish, safe passage of the cluvers/sluices is required.

Monitoring indicates that nearly all fish species observed in the Scheldt Estuary were also observed in the polder, frequently in large numbers. Net captures show that only small numbers of fish enter the polder via the inlet sluice, however, the fish tend to find their way into the polder via the outlet sluice. Fish might be attracted by the oxygen rich water which leaves the polder, and thus migrate into the polder against the outflow. A survey undertaken in 2006 (Simoens et al., 2007) found 14 species utilising the site, compared to 15 in the adjacent estuary. Particularly high numbers were observed for the following five species: three-spined stickleback (Gasterosteus aculeatus), ninespine stickleback (Pungitius pungitius), amur bitterling (Rhodeus sericeus), stone moroko(Pseudorasbora parva) and European flounder (Platichthys flesus).

Flora: The vegetation monitoring shows a shift in the direction of water tolerant species. Even relatively stress resistant species such as the large nettle and hairy wild rose were replaced by true marsh species within a relatively short time. Colonisation by Lythrum salicaria, Typha latifolia, Veronica, Phragmites australis and willow Salix occurred within one year, whereas at lower elevations vegetation has been replaced by mudflat (Maris et al., 2008).

Water quality: With respect to water quality, the oxygen enriching impact, which is mostly due to the high inlet sluices acting as aerators, has been described as ‘striking’. At the sluices, an immediate increase of up to 60% has been observed and a further 20% enrichment has been attributed to surface oxygenation. On warm, sunny summer days, oxygen reaches even higher values as light penetrates easily through the thin water layer in the polder and oxygen production by primary producers leads to over saturation (Maris et al., 2008). Regulated Tidal Exchange operation: When compared with the Scheldt, high-water levels in Lippenbroek are around 3m lower in elevation, without significantly affecting the pattern of spring and neap tides (Figure 1). Important parts of the polder therefore receive flooding frequencies comparable to those of the fronting saltmarshes. However, the high inlet/low outlet technique does lead to a distortion of the tidal movement; the tidal curve is no longer sinuous but has a stagnant phase. This is due to water only flowing in around high water (‘top of the tide’), and only exiting once water levels outside in the estuary have fallen low enough for the gravity controlled outfall sluice to open. The authors stressed that the inlet structure had to be sufficiently high, to achieve a significant difference in ingress duration and volume, and thus bring about a large variation in water levels. It was also highlighted that flood frequencies are mainly stipulated by the sluice configuration, no longer by the elevation in relation to the tidal frame; this allows marsh development in lower lying areas (Maris et al., 2008).

The CRT technique employed at Lippenbroek has potential applicability for habitat creation along other heavily developed estuaries. It furthermore represents a technique which can significantly reduce the tidal prism of a site, without compromising the development of a range of intertidal habitats, thus minimising potential negative effects on small estuary systems. The technique also enables the establishment of intertidal habitats at lower elevations in the tidal frame than those of intertidal systems fronting a defence, and would thus be of potential use in areas where land levels behind a defence are relatively low compared to fronting levels. However, longer flood duration and low-turbidity stages may lead to higher accretion rates than in adjacent natural systems(ABPmer, 2008).

The inlet structure at high tide