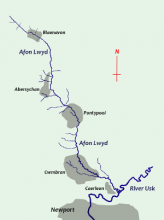 The area the FOAL Project worked on

In March 2010 the Foundation started a 21 month EAW Wild Fishing Wales funded project on the Afon Llwyd. In partnership with Torfaen County Borough Council, Cwmbran Angling Association and Pontypool Angling Club, the project was designed to improve salmon, sea trout and brown trout stocks in this lower Usk tributary that joins the main river just upstream of Newport. Once one of the most polluted rivers in the UK, Afon Llwyd was "cleaned up" in the '80s and though it receives the occasional mine water discharge, it is now able to support salmonids. Recently, Environment Agency Wales completed a fish pass to allow fish to ascend the first weir upstream of the tide at Pontymoel.

The project has involved litter removal, invasive weed eradication and other habitat improvements such as coppicing and erosion-preventing revetments. The EAW's Wild Fishing Wales program's objective is, as the name suggests, to increase fishing opportunities. Within FOAL, riverside paths have been made safe and assistance provided for partially disabled anglers. Some the Llwyd's fishing has also been included in the Foundation's Wye & Usk Passport.

One of the first actions under the FOAL project was to lower a weir that blocks the path of migrating fish further upstream at Tynantddu, Pontypool. This was followed by work to the weir upstream at Cwmafon. In addition, we have increased the salmonid spawning habitat of the river, little of which existed upstream of Pontypool, by constructing 'V' weirs to trap gravel and create suitable areas.

Meeting of partners. Consents applied for weir removal at Tynantddu.

Revetment to repair erosion at Llanyrafon.

The coppicing for the winter period concluded, it was time to reflect on the successes of 2010 and set the stage for work in the second phase of the project during 2011.

March: In partnership with the TCBC and EAW it was deemed necessary to mitigate for the loss of Torfaen’s only known Sand Martin nesting site at Llanyrafon. The site was lost when the eroded riverbank was restored to prevent further loss of playing fields. This was unknown territory for everyone concerned with the project and definitely a first for the area. Following advice and with plans from the Sand Martin Trust, the Foundation had two artificial nest boxes manufactured by a local fabricator. Just before the migratory birds were due to return to Torfaen, the boxes were set in place on the revetment site where the old natural nest site used to be. Within two weeks the Sand Martins had returned and immediately took up residence in them. In fact, there seemed to be more pairs in residence than in previous years at the old site. The nest boxes were a huge success for the project and proved that with care and planning, environmental risks can be mitigated when a project such as the riverbank revetment takes place.

June: Litter pick at Llanyrafon with KWT and volunteers. 1 skip full of rubbish removed. Disabled fishing access platform and ramp under construction. Site sought for erection of the WFW plaque.

August: Surveys undertaken with local authority staff to determine sites for forthcoming Japanese Knotweed spraying and coppicing season. Plans put in place to construct an artificial otter holt in the grounds of Pontypool Park. This project would be undertaken by local volunteers. Litter pick at Pontypool Park with KWT and volunteers. 2 skips filled, one with rubbish and the other with scrap metal. 12 volunteers gave up their day to help with this clean up.

September: An artificial otter holt constructed from logs was constructed on the riverbank within Pontypool Park. 16 volunteers, including 8 local scouts, participated in this event. Japanese Knotweed spraying on both banks of the Afon Lwyd through Cwmbran Park with WUF staff and volunteers. Electrofishing Afon Lwyd with EA staff took place with varying results. It was encouraging to find salmon fry in the river upstream of where the Tynantddu weir was altered.

October: The Japanese Knotweed spraying programme continued and showing excellent results. Coppicing of mostly alder and sycamore started at upper end of Cwmbran Park by a WUF habitat team 2 gravel traps constructed in the main river at Abersychan. November: Coppicing and spraying programmes completed early in the month. Gravel traps surveyed with EA for amount of clean gravels required to complete the project.