From RESTORE
Jump to: navigation, search
5.00 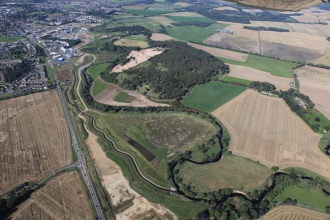 Elgin, one of Scotland’s oldest towns, has developed along the banks of the River Lossie for over 900 years. The River Lossie drains an area of approximately 270km² to the sea at Lossiemouth. Flooding in Elgin is not a new problem. Around twenty flood events have been recorded since 1750, with 11 floods in the last 50 years. Most recently Elgin flooded in 1997, 2000, 2002, 2009 and 2014.

Until recently, during major flood events, key transport links that serve the north east of Scotland have been severed. In 1997 and 2002, the A96 trunk road was closed for more than 48 hours, whilst the Inverness to Aberdeen railway line suffered considerable damage and was closed for several weeks. Flooding has caused great disruption and distress to the community of Elgin. In 2002 over 200 households were evacuated and 10 people had to be airlifted to safety; while the number of flooded homes and businesses was substantially greater.

The Elgin Flood Alleviation Scheme (FAS) is the single largest to be promoted in Scotland to date. The scheme is designed to provide a current-day standard of defence of 1 in 200 years. The preferred scheme for Elgin was selected on 25 February 2004. A Flood Prevention Order was publicised in October 2007 and a planning application submitted in January 2008. Scottish Ministers confirmed the scheme in December 2010, with construction starting in April 2011. Construction is due to complete in 2015. The scheme protects around 750 residential properties and 250 businesses.

The scheme includes:
• The restoration of an expansive blue/green corridor through Elgin reflecting both the historic and natural setting of the watercourse.
• The creation of a two-stage channel within the flood corridor, through the centre of the town, by floodplain lowering allowing flood flows to pass safely through Elgin.
• The creation of a new flood relief channel opposite Elgin Cathedral and a new natural channel to move the Tyock confluence approximately 1.5km downstream to address flood risk in New Elgin.
• Setting back flood embankments and flood walls from Glen Moray Distillery in the west to the new confluence of the Tyock/Linkwood diversion channel with the River Lossie in the east.
• Replacement and construction of three bridges to increase flood resilience and improve access. The innovative Landshut Bridge was designed within the historic context of the area surrounding Elgin Cathedral and Pans Port providing an understated structure with high architectural merit.

Integrated and science-based monitoring has illustrated positive change over the course of the project. Baseline geomorphology, ecology, and water chemistry surveying and repeat surveys during construction within and adjacent to the scheme footprint have enabled the design of the scheme to progress in a way which protects the existing characteristics of the area.

The scheme monitoring includes:
• Geomorphological surveys identified areas where bank protection was required and on-going monitoring will be undertaken to ensure that erosion is mitigated.
• Water chemistry sampling has proven that the water treatment feature has been successful in removing dieldrin from the Tyock Burn.
• Continued monitoring of the newly established areas of wetland, riparian and wildflower meadow planting will be required to ensure that these biodiverse habitats flourish.
• Large areas of giant hogweed and Japanese knotweed have been treated over the past seven years. On-going monitoring and action will be required to ensure that these do not return to the area.
• Bat and bird boxes will continue to be monitored and maintained as required.
• Aerial surveys will continue into the future to undertake wide scale assessments. </div>

The same integrated project team has worked on five separate flood alleviation schemes protecting four communities in Moray under the banner of Moray Flood Alleviation. These schemes represent an investment totaling £180 million over a fifteen year period. This has been key to the success of the project.

The project team operates a “continuous improvement” philosophy, using regular lessons learnt workshops to ensure that time and money is not wasted on avoidable mistakes in the future. Over the course of the project the team has developed a collaborative and efficient way of working. Currently the project is set to come in £10 million below budget. Four of the five schemes have been completed on time with Elgin scheduled to finish on time this year, 15 years after the start of the project. The project team has been co-located in the same open plan office throughout the scheme’s development and delivery ensuring matters are discussed easily and decisions are made quickly.

During the development of the design for the scheme, the implementation of the Water Framework Directive was in its infancy. Working closely with SEPA, the team were able to predict the implications of the Directive and design a scheme which complemented the requirements. Meeting with SEPA on a monthly basis has resulted in a sound relationship where issues have been discussed and resolved promptly.

The Elgin scheme has been shortlisted for the ACE/NCE 2015 Outstanding Achievement Award, which recognises schemes that have made a contribution to the reputation of consultancy and engineering. The team has also twice been commended by The Saltire Society at their Awards for Civil Engineering; in 2010 for the Forres FAS for a “well managed and well executed FAS, constructed with high regard for the environment”, and in 2012 for the Rothes FAS for “the co-operation, goodwill and ingenuity demonstrated by the team, coupled with the response elicited from the community.”

“In more ways than one our community has been given a new lease of life and features have been created that complement the authentic architecture and public face of our village.”
Rev Bob Anderson, Rothes Parish Minister

“I challenged the team to deliver flood alleviation and complement the environment. My measure of success was that the Scheme should be “invisible” and prevent flooding. Not only was the challenge met, but the Scheme was delivered ahead of programme and under budget. The team excelled and the outcome is very pleasing.”
Peter Haslam, Moray Council