Case study:Biodiversity conservation and recovery in the river basin Asón

The Asón River source is located in the Collados del Asón Natural Park. It flows through habitats classified as of Community Interest. These are the habitats of species of great interest such as Pyrenean musk rat, wolf, salmon and European bison. Downstream, where the waters from the river meet the sea, are the Santoña salt marshes. This site is an important staging post on the migration route for hundreds of species of birds, which congregate there during the winter. Three sites representative of the valuable ecosystems along this river have been proposed for inclusion in the Natura 2000 network.

The aims of the project comprise not only the hydromorphological restoration of the river, but the conservation of the entire river basin. The project carries out diverse actions in three areas of the basin: at the head, in the middle, and at the estuary. The measures at the river include environmental education information and awareness at the interpretation centre of the SCI. The improvement of instream habitat for salmonids, the recovery of otter, silvicultural treatments and hydrological study are some of the actions developed.

This project counts with the support of local, regional, national and European institutions. The financing comes from the LIFE initiative, the Consejería of Agriculture and Fisheries, Ministry of Environment, INEM and Caja Cantabria.The total budget was of 1,233,905.50 €. The UE cofinanced part of the project with 616,952.75 € from the Life initiative. Environment, INEM and Caja Cantabria.

Technical studies were completed, authorisations obtained and management plans were prepared for the three sites.

A total of 25 Cantabrian chamois (Rupicapra pyrenaica parva) were reintroduced and seven young were born, bringing the total to 32 animals present at the end of the project. Some 62 ha of land was bought (34 plots) and reforested with beech (Fagus silvatica) forest, and agreements were signed for the reforestation on an additional 23 ha. An agreement to lease 30 ha of holm oak forest was obtained. Agreements with hunting associations to lease hunting rights and create no-hunting zones were signed for 4 226 ha within the SCIs. Forestry management included planting of trees, protecting trees with photodegradable guards, creating fire breaks, and scrub clearance. As a result of this project work, monitoring showed that numbers of the following species had increased: wolf, European hare (Lepus europaeus), Roe deer (Capreolus capreolus), common wood pigeon (Columba palumbus) and Golden eagle (Aguila chrysaetos). Fencing was erected at the entrance to a cave, which was being used for sheltering livestock, to reduce disturbance to several colonies of two Habitats Directive Annex II bat species (Rinolophus ferrumequinum and R. hipposideros). Since its installation, the colonies have increase from 12 to 22. Three dams were to be removed on the Asón river – but this was revised to the building of fish passes instead. These were not established in the project duration although the necessary permissions were obtained. After an environmental impact assessment and hydrological studies, 12.5 ha of the Montehano salt marsh was re-flooded and 13 ha of exotic species, such as Eucalyptus, were removed. Surveillance patrols managed fire risk and hunting, as well and ecological monitoring. An interpretive centre was set up and outreach included school children, farmers, fishermen, hunters, tourists and cavers. In addition to the land the project purchased, a further 63 ha were ceded by councils and associations for restoration and conservation.

At the end of the project, the Foundation obtained an Interreg IIIB [Interreg is an EU-funded programme, IIIB deals with transnational co-operation involving national, regional and local authorities] project (“Waterwaysnet”) to allow the awareness-raising and habitat investigation actions to continue.

The broad awareness-raising campaign has reached women’s associations, schoolchildren (12 schools, 1 500 students in 2000-2001), the general public, farming and fishing unions, sports associations(cavers), tourism-related institutions. In all, some 35 institutions have been informed about the project.

One of the main pressures is the surface water abstraction. In 1973 the Hydraulic Planning Service had the rights for extract 150 l/s over a period of 99 years from the Confederación Hidrográfica del Norte. The demographic evolution of the coast towns (even higher during the summer), the urbanisation and the increase of the industrial use of water made this concession obsolete. Subsequentley, the construction of bombs and the substitution of the existing pipes by ones of bigger capacity enabled the extraction of an amount of water much higher than allowed.

The reduction of flow at dry summer periods is reflected in the inexistence of flow. Also,this decrease would affect not only the Asón River, but to the Marshes themselves, where changes in the patterns of salinity (keys to the very existence of the marsh)during periods of severe drought alterations, may affect the biological communities.

Other threats to this site derived from human activities and over-use of the resources are: draining of the marshes, unauthorised shellfish farming, illegal fishing, poaching and the spread of exotic species. Misplanning and mismanagement of tourism, in turn, are having an adverse impact on conservation of some of these sites. 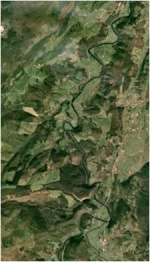 Ason River in a reach without modifications

Ason River in a channeled reach