Case study:Bio-engineering techniques for bank protection on the Moselle River in Villey-le-Sec 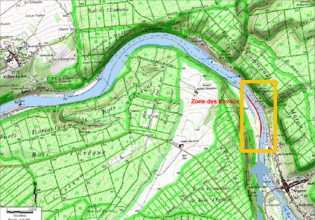 Location of the project (GN - Scan25)

Following the 20-year flood in 2006, 80 metres of metal sheet piles, dating back to the work to open the Moselle to large ships, collapsed. The bank became unstable and erosion occurred at points along a 300-metre linear distance.

In light of the damage, an assessment of the banks was carried out by an engineering firm in 2009. The results made clear the seriousness of the situation and the risks incurred by the notches in the banks caused by the erosion. The danger was that the eroded material could be deposited in the navigation channel and the service road damaged.

The VNF technical department wanted a technical solution for both river navigation and the ecological issues in the area, namely an improvement in lateral continuity. The poor condition of the sheet piles and the available funding both contributed to the decision to proceed with the operation.

The sheet piles along the work site were removed. The banks were reworked over a distance of 1,000 metres and a coconut geotextile was laid. Local plant species were then planted along the banks, including helophytes (three to four plants per linear metre), willow cuttings, etc.

The study on the initial status condition and post-work monitoring were carried out in the framework of the ISO 14001 certification, i.e. to determine compliance with the ISO 14001 standard.

The study on the initial status condition was carried out in the summer of 2011 and addressed the fish and hydrobiological compartments. Electrofishing was done in the main channel. Hydrobiological monitoring implemented a protocol derived from the IBGN (standardised biological index), without a final score. Visual monitoring of changes on the site was regularly carried out.

Post-work monitoring on the same compartments was done in July 2012 and 2013, i.e. 6 months and 18 months respectively after the work.

Ecological monitoring will be pursued 2, 3, 5 and 10 years after the work to protect the river banks.

The results of the fishing campaign in 2012, one year after the work, revealed a relatively low level of hydrobiological quality and overall quality in terms of fish. This may have been due to the recentness of the work because the helophytes had not had enough time to form sufficient cover and enable the various organisms to colonise the site.

The monitoring in July 2013 showed improved results. A greater number of alevins were present, signalling progressive colonisation of the bank habitats. The vegetation is now firmly implanted and growing satisfactorily. Future monitoring work will indicate whether this positive trend has continued.

In addition, significant colonisation by alder trees at the foot of the bank was observed, which will require monitoring to track the future development.

The objective of the work was not to restore significant hydromorphological functioning, but to re-establish the lateral continuity that had been lost due to the presence of the metal sheet piles. During the monitoring visits, signs of several passages by beavers were noted, confirming the significant improvement in transverse continuity.

Voies navigables de France plans to return to the site to make minor repairs on the geotextile and to replant helophytes where they did not develop well.

The VNF technical department is satisfied with the overall results of the operation. The work done on the site did not affect navigation. Bio-engineering techniques for river-bank protection cost less than standard, civilworks techniques. However, their use requires correct identification of the pressures weighing on the work site and adaptation of the selected solution to those pressures. The subsequent maintenance work must also be adapted to the selected vegetation. VNF now plans to continue replacing certain civil works with bio-engineering techniques in the sectors where it is possible.

Installation of geotextiles and planting of helophytes on the banks of the Moselle River. Fall 2011. Patrick Adolph – VNF).

Signs of beaver activity and passage on the banks. Fall 2012. (Patrick Adolph – VNF).

Development of grass and bushes on the banks of the section where the work took place. June 2013. (Patrick Adolph – VNF).