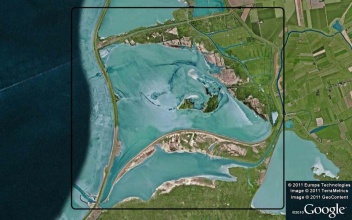 This regulated tidal exchange (RTE) was created in 1988 as in situ compensation for advancing the defence line into the Nordstrand Bay in 1987 (land-claiming 3,350ha of mudflats, sandflats and saltmarshes in the process). The 853ha RTE scheme forms part of a compensation package undertaken in the newly created polder; the RTE is generally referred to as ‘the salt water biotope’(Salzwasserbiotop). Whilst the main habitat created is a saline lagoon, approximately 380ha of intertidal habitats are also included (166ha tidal flats, 214ha saltmarsh). Furthermore, there are some 95ha of transitional habitat at the back of the site. The remainder of the 3,350ha Koog (i.e. polder) was converted into a number of terrestrial/freshwater habitats for nature conservation purposes, including reedbeds, marshes and transitional grassland. The whole polder was declared a nature reserve in 1992; and is now highly designated, forming part of the following Wadden Sea sites: Ramsar, Special Protection Area, and Special Area of Conservation. The RTE site is open to tidal influence through two culverts in the new sea dike, which are fitted with sluice gates. These are 3km apart, and have the following dimensions: 6mx4.30m at Holmer Siel and 6mx3.70m at Lüttmoorsiel (Siel = sluice). Material was borrowed from inside the site, up to a depth of 20m and used for seawall construction. Between the two sluices, a ring channel with a water depth of 2-3m was dug; the excavated material was used to create a sandy peninsula. After testing several sluice combinations for some years, the Holmer sluice was redesigned in 1994 so it could act as a year-round in and outlet sluice (like the other sluice). Both sluices are now kept open at all times (they essentially act as culverts), except during storm surges. A maximum tidal range of 0.4m is normally achieved. In winter, storm floods are simulated by damming up water over several tidal cycles.

The scheme was monitored for 10 years; mainly with regards to fauna (i.e. birds, invertebrates, plankton, fish), but also water and sediment quality.

Accretion: Hagge et al. (1997) note that sediment accretion was not measured as such but it was generally observed that sedimentation was taking place, and that the sinks (i.e. the ring channel and the two depressions created by the sand dredge) were slowly being filled with mud (ca. 5m in the depressions over 10 years). The pensinsula created with the material excavated from the ring creek became an island in 1991 through natural creek evolution. Fish, benthos and plankton: The fish present in the lagoon were found to be typical of the Wadden Sea, which means that they can pass through the culverts (which experience average current speeds of up to 4m/s). The benthos and plankton composition was also found to be typical of the fronting intertidal by 1994. The relatively long duration of this establishment period was firstly attributed to the size of the area, but more importantly to the sub-optimal, varying conditions over the first years of the site’s existence (i.e. testing of various tidal regimes and malfunctions of the sluice gates). By 1997, only a few species present on the fronting tidal flats were not found within the site. There were however clear differences between species densities – especially for molluscs. Molluscs were relatively rare in the site, which the authors thought was most likely due to a high predator pressure, who found the habitat to be favourable (young mollusc specimen were found). For polychaetae, the predator pressure seemed lower, as their larvae are produced year round (Hagge et al., 1997). Birds: With regards to general shorebird use after the land claim when compared to the period prior to it, Atkinson et al. (2001) summarised a report by Hotker (1997) as follows: It appears that only the herbivorous species wigeon and barnacle goose showed increases in the RTE and, even with the remaining intertidal habitats, shorebirds showed a large decline. Only redshank used the RTE for feeding at high tide and the reduction in tidal range, reduced invertebrate densities and enclosure by tall embankments rendered the remaining area unsuitable for shorebirds. As a result of the embankment, the numbers of Brent geese, shelduck and most shorebird species decreased in the area surrounding the embankment compared with pre-embankment numbers. Most species elsewhere in the German part of the Wadden Sea increased or were stable over the same period. Hotker concluded that ‘the lost feeding opportunities due to the land claim could not be compensated in the immediate surroundings of the study site’. Breeding bird data is available from the site managers’ website (Naturschutzstation Arlau, 2011). The islands in the lagoon have apparently become home to established breeding colonies for several rare birds, including terns, pied avocet and plover. The graph from the image gallery shows how the nine most numerous breeding bird species present in the RTE (excl. gulls) have developed since 1987. Site functioning/operation: Hagge et al. (1997) concluded that the appropriateness of the saline lagoon as compensation for the lost habitats had been limited. Apart from it not constituting like-for-like compensation, the system is very sensitive, and requires constant maintenance. For example, scour caused a substantial depression to develop immediately behind the southern culvert, which connects with a more substantial tidal creek than the northern culverts (maximum flow velocities of 5.5m/s occur). Remedial action involved filling this hollow with a mix of 0.5-1.5-tonne boulders and stones (personal communication with sluice manager in 2007). Furthermore, the system is sensitive to long periods of low water levels; these are however frequently required to maintain the embankments to the neighbouring reservoirs and the sluices. The following recommendations were made for a successful on-site water/tide level management, to ensure the area does not suffer from oxygen starvation or extensive algae coverage, and supports a range of habitats and fauna: • enable maximum, simultaneous, water exchange through both gates; • enable natural tidal rhythm throughout the whole year; • enable uncontrolled water exchange to lengthen the life of the sluice technology, and • simulate a storm surge once or twice a month during the winter months - by damming water over a maximum of three tidal cycles.

Water flowing out of the Holmer Sluice culvert (Taken by: M. Dixon, RSPB, 2006)